Wear Rihanna’s most iconic looks on your feet

The Rihanna Navy can now wear the star’s most iconic looks — on their feet. In her latest Fenty for Stance collection, called Iconic Looks, the singer presents two box sets that feature four of her most popular looks to date.

Both of the sets, now available on Stance’s web site, include two pairs of socks. The first, the Rihanna Music Video Box, includes the red lip and denim shorts look from her Pour It Up video, as well as the outfit she wore in last year’s Work featuring Drake. Both are Rihanna’s “most incredible and uncommonly cool outfits from her music videos,” according to Stance. 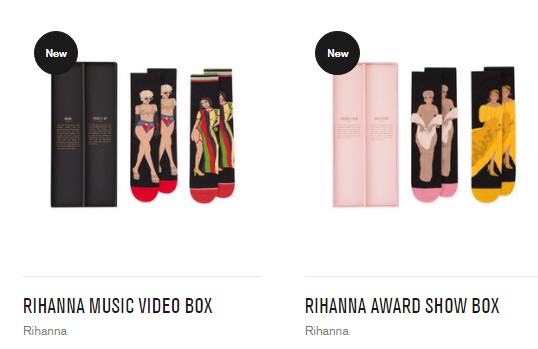 The Rihanna Award Show Box features the Adam Selman Swarovski crystal dress from the 2014 CFDA Awards and the Guo Pei gown she wore to the 2015 Met Gala — both of which Stance calls “her most jaw dropping award show looks.” The sets each retail for $48 online.