Throwback Thursday series is back! Due to tons of photos and little time for anything else I did not post anything last week. I am still in awe of Rihanna’s recent TUSH Magazine photoshoot so I changed the topic of this week’s post last minute.

Today we are going back in time to 2011, when Rihanna got her first American Vogue cover, the most prestigous one out of all Vogue editions. After almost 6 years in the industry at that time she finally got the cover of the most prestigious fashion magazine in the world. What took Vogue and Anna Wintour so long? I do not know but Rihanna has been setting trends and pushing bounderies from at least 2007 when her Good Girl Gone Bad era was in full effect.  As for 2014 she has covered different editions of Vogue seven times, including four covershoots for American Vogue (three regular + one MET Gala issue). In June 2014, she received CFDA Fashion Icon Award from Anna Wintour herself.

But let’s go back to the main topic: April 2011 issue of American Vogue. In January 2011 Rihanna broke the news on Twitter:

The whole fashion world has shaken. The bad girl Rihanna, who rocked vibrant red hair at that time, gets her first Vogue US cover. No one really knew what to expect. Annie Leibovitz is one of the world’s most recognizable fashion photographers and it was the first time the ladies worked together. Check out the Behind the Scenes video.

The cover and the shoot was published in the middle of March, 2011. The photoshoot was accompanied by the story and interview titled: Rihanna: Living Out Loud. The photos were taken in Los Angeles. In Vogue App we could see exclusive content that was not included on the site or in the paper version of the magazine. 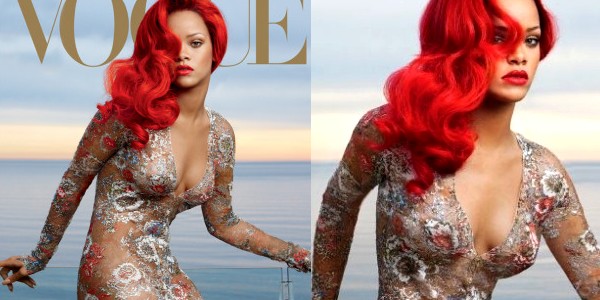 For the cover photo Rihanna channeled her inner mermaid in Chanel dress from their 2011 Pre-fall collection. In the story we can read:

Rihanna once said if she was not a singer she would be a psychologist. Her advices for the fans and the observations she makes are always on point so I think she would be really good at it. 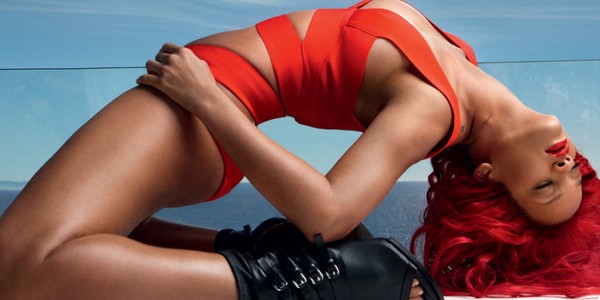 In this Body Electric photo Rihanna is rocking Hervé Léger by Max Azria cutout swimsuit and Alexander Wang open-toe booties. Rihanna’s body looks amazing but how did she feel about it at that time?

“Over the holidays, and even during filming [Battleship], I realized that I actually like my body, even if it’s not perfect according to the book. I just feel sexy. For the first time, I don’t want to get rid of the curves. I just want to tone it up. My body is comfortable, and it’s not unhealthy, so I’m going to rock with it.”

Many would say that having Rihanna body would mean you always have to be content with it but well, she is just a human being. In her recent ELLE Magazine interview she said she also happens to have a bad day but we all know her bad days mean she still looks flawless! 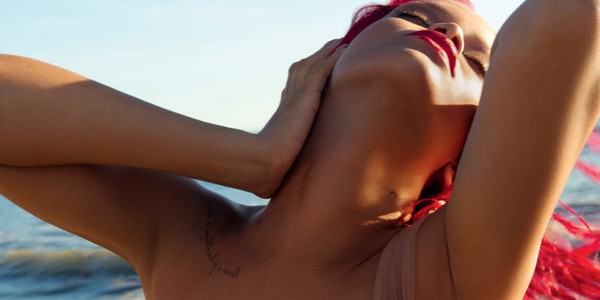 The Inner Beauty photo is one of my favourites from the shoot. She is wearing Chloé one-shoulder mesh dress. The red hair was one of the risks Rihanna has taken but was it hard to create looks that worked with it? Mariel Haenn with whom she worked at that time said:

“It’s been more of a challenge to figure out looks that are going to work with the hair and not compete with it.”

The solution was going more feminine and going away from the tough and hard look that Rihanna rocked in 2009 and at the beginning of 2010. During the LOUD era she kept it feminine but still made sure it is not girly all the time by adding edgy elements. 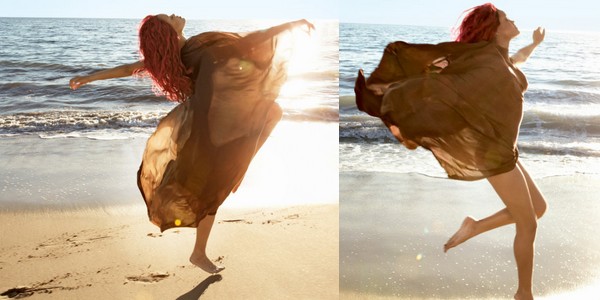 Rihanna running carefree and without paparazzi on a beach seems impossible now. Her every beach outing ends up with her being surrounded by fans, paparazzi and simply people who want to take a look at her. But in these photos called A different beat and Moment in the Sun we can see her enjoying herself and the beautiful scenery. In the photos she is wearing Lanvin silk dress. How her love for fashion started?

“When I was fourteen and first started going out, I always wanted to be the opposite of everyone else so I would go to the club in a polo T-shirt and pants and sneakers and a hat on backward, just so I would not be dressed like other girls. And I got desperate for things that weren’t available in Barbados. I would cut things out of magazines. I was obsessed with creating a visual with clothing, and the way things are combined.”

At the age of 26 she has Fashion Icon Award and was the face of brands like Gucci and Balmain. She also created collections for River Island and Armani. We are excited to see what the future and Rihanna’s creative mind bring. 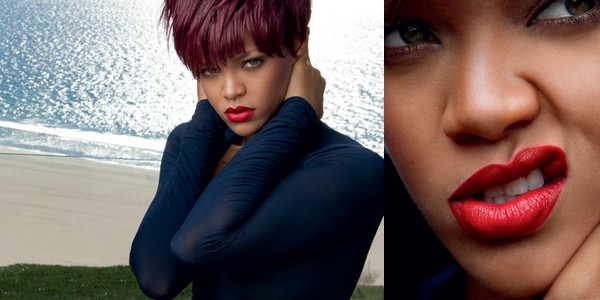 In the last two photos A Girl Like Me and Tough Love Rihanna is wearing Donna Karan New York midnight-blue bodysuit. Rihanna has always been unapologetic but how did she feel when she found freedom in expressing herself as an artist and as a person?

“The minute I discovered that freedom and started toying with it, I loved it so much that it felt real for the first time. When something feels real, you don’t make any apologies for it. When it feels good to you, nothing else matters. Everything else is just noise.”

With this quotation I am ending this week’s Throwback Thursday. I hope you enjoyed this post as much as I enjoyed writing it. Don’t forget you can give me ideas for the next post on Twitter. Come back next week for new Throwback Thursday post.