2015 will mark Rihanna’s 10th year in the music industry. Time flies, right? Throwback Thursday series brings you back to 2008 today. It was a phenomenal year for Rihanna and the year she got her first ever Grammy Award.

Let’s go back to 2007 for now, the moment Rihanna’s star started to shine brighter than ever. In March the first single from her third studio album ‘Good Girl Gone Bad’ was released. The whole world could not help but sing ‘Umbrella’ with the iconic ‘ella ella eh’ part. Jay-Z, Rihanna’s mentor, raps at the beginning of the song. The United Kingdom was under the Rihanna spell for 10 consecutive weeks as it is how long the song  stayed at number 1 on the Official Single Chart. Rolling Stone magazine named ‘Umbrella’ one of the 500 Greatest Songs of All Time.

The 50th Annual Grammy Awards took place on 10th of February 2008 and Rihanna with her team were nominated in several categories:

Rihanna performed during the show and took home one award: for Umbrella as she and Jay-Z won in ‘Best Rap/Sung Collaboration’. 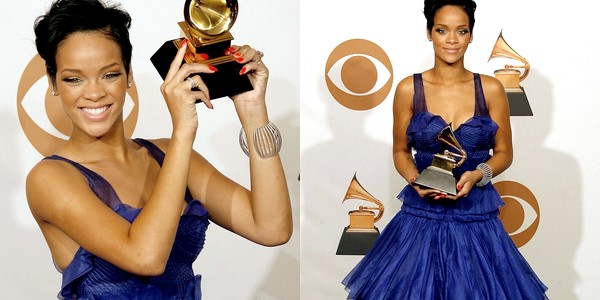 During the hilarious speech (watch) Rihanna thanked Jay-Z for being a part of the record. She also thanked people like L.A. Reid, Jay Brown and of course Tricky Stewart and The-Dream for writing ‘Umbrella’. She also mentioned her mother, father and two brothers Rorrey and Rajad. Even Barbados got a shoutout ‘Barbados, I love you. We got one!‘. She ended her speech with ‘Thank you so much, that means a lot’.

After two and half a year in the music industry Rihanna already got her first Grammy Award – the most prestigious music award. Rihanna has been making her fans proud since 2005 and has been working really hard for what she has and what she has achieved so far. I could not be more proud to stan for such a down to earth, honest, fearless and inspirational artist as her. It means a lot to see how she respects her fans and their honest opinion. I am even more excited to hear new material from her as she always gives us something new, bit unexpected and always reinvents herself. The 2008 Grammy Awards was one of those moments her fans will never forget.

Thank you for reliving this amazing Grammy moment with me. Throwback Thursday will be back next week!