The Story Behind Rihanna’s Shape-Shifting Alien in Valerian

When it was announced that Rihanna would play a sexy, shape-shifting alien named Bubble in Valerian, Luc Besson’sadaptation of the French sci-fi comic series, the Internet understood this as perfect casting. The sexy singer-songwriter has a habit of transforming herself—or red carpets, music videos, photo shoots, and the odd acting gig—with such boldness and ease that it wouldn’t surprise anyone if Rihanna revealed herself to be an actual extraterrestrial: some futuristic creature put on Earth to add a little excitement to our increasingly bland, stylist-curated red carpets. Besson, a lifelong fan of the comic series, immediately knew that Rihanna would make the perfect Bubble in his passion project. Yet it surprised him more than anyone when Rihanna halted her schedule to take on the role.

“Everybody said, ‘Forget it; that’s impossible,” Besson has said of the casting coup. “I said, ‘It doesn’t cost anything to try.’” In fact, the director said that simply getting ahold of Rihanna for the initial meeting was the most difficult aspect of their collaboration.

“She’s one of the biggest stars in the world, so to catch her is a nightmare because, like, you have a meeting with her sometime at 2 A.M., and you’re not the last one,” Besson told Vulture. But the unlikely partnership between French filmmaker and Barbadian pop star was surprisingly easy once Rihanna heard about the character she would be playing.

Though “glampods”—alien shape-shifters—appeared in the original comic series, Bubble is Besson’s invention. Valerian (Dane DeHaan), the hero of the story, first sets eyes on Bubble after stumbling into Space Station’s red-light district and seeing her on stage. When Besson was dreaming up the project, he envisioned that Bubble would dazzle Valerian (and audience members) with a showstopping performance during which she uses her powers to slide through a kaleidoscope of costume changes amid impossible choreography.

“Luc had this idea that this one character can change into every man’s fantasy—the cabaret performer, the Marilyn Monroe-type performer, the African tribeswoman—but in a way that also appealed to women,” explained Valerian producer Virginie Besson-Silla by phone. “She is sexy and cute, but the sexiness is never negative. It was more about the idea of being in awe and seeing something change and become more and more beautiful, moving in a way that no one on this planet could.”

Rihanna loved the idea so much that she shed her entourage and other superstar trappings; flew to Paris for over a week to film; and walked onto set eager to learn.

“Obviously Rihanna’s not scared of the camera, and she plays in front of thousands of people,” Besson said. “But she told me, ‘I’m a beginner at acting and unless I work with someone who is good, I won’t learn.’ I was touched by her honesty, because if she’d said, ‘I’m a superstar; you can’t shoot me from this angle,’ what could I have done? She followed direction very well, got all the details, and was delightful to work with.”

Although she only gets about five minutes of screen time recognizably as Rihanna—the singer-songwriter did motion-capture work for the rest of her performance, in an unrecognizable shape—the aforementioned intergalactic makeover montage is one of the most delicious sequences of the film, and well worth the price of admission.

The sequence was also a special one for costume designer Olivier Bériot who, with his team, created nearly 400 costumes based on drawings Besson commissioned from concept artists in the years leading up to production. When it came to the makeover montage, though, Besson let Bériot have free rein over the designs after giving him a few guidelines.

It was Besson’s idea, for example, to give Rihanna a throwback cabaret costume complete with bowler hat, one of the lone references to an era long gone in the film’s 28th-century galaxy. For the design, Bériot looked back to classic cabaret costumes—like the ones worn by Liza Minnelli’s Sally Bowles in the 1972 film.

“We kept the shape of the design of the costume that you see on Liza Minnelli,” Bériot said of the black halter top, plunging neckline, thigh-high boots, and short-shorts shared by both designs. “But we used some shiny material, embroidery, sequins to give it something modern and make it a little less 70s.”

Was Bubble’s sartorial nod to Sally Bowles conscious, you might wonder? Surprisingly, even though Bubble is an illegal alien essentially serving out an indentured servitude doing sexy, shape-shifting alien things—and is named Bubble—the character is also very cultured.

“[Bubble is] an alien who has the capacity to take any shape she wants,” Besson has explained. “In our film, glampods are artists who’ve gone to school, so they know masters such as Shakespeare, Molière, and Rimbaud by heart. In that way, Bubble is the ultimate actress.” (We presume Liza Minnelli ranks up there with Molière.)

The Rihanna-as-Sally-Bowles moment is brief, as Bubble whirls through more costume changes, including an elaborately appointed Egyptian princess and a Marilyn Monroe copycat, complete with slinky gown. Her nurse outfit is an otherworldly take on the already-sexy-nurse costume beloved by sorority sisters on Halloween, only with an even sexier twist—a bustier bodice and curve-hugging seams. 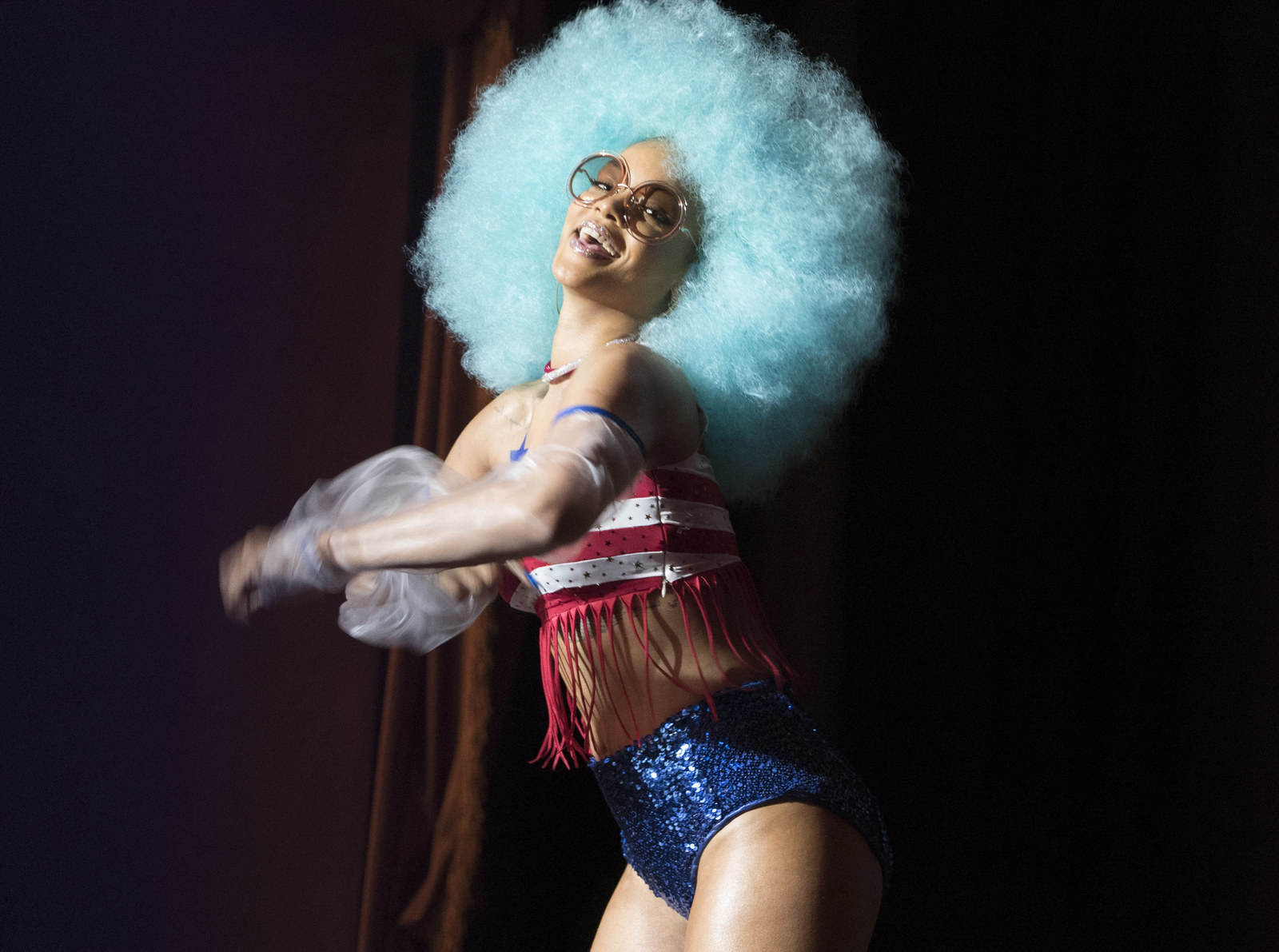 The costume—a cross between a nurse and Catwoman, with a cherry-red stethoscope tied tight around Bubble’s neck like a choker—was created with Japanese latex artist Atsuko Kudo, whose design gives Rihanna a smooth, Barbie silhouette. Most impressive, however, is the fact that Bériot and Kudo created this vacuum-packed costume—and the rest of Rihanna’s looks—without the pop star present.

“She arrived on set one day before filming her scenes,” explained Bériot. “We had one day of working together. But her team sent very precise measurements, so we worked with a body double . . . when she arrived, everything fit her very well.”

Bériot, like Besson, was a bit nervous about what to expect from Rihanna—but the pop star did not let him down.

“She jumped into the costumes without any questions,” said Bériot. “I was surprised. I was happy. I thought maybe she would want to change everything, but not at all. She jumped in them, and she played with them. She is a real performer and she is used to transforming herself for each performance.”

As Rihanna tells it, though, the role was a natural fit for her: “Bubble is an artist, and what makes her feel free is performing and making people happy.” In our conversation, Besson-Silla found herself exclaiming that Rihanna shares many of Bubble’s otherworldly, giddiness-inducing virtues.

“She has this magic,” Besson-Silla gushed. “The other day at the premiere, Luc said, ‘She is a queen,’ and she is. Because she is still young and has this element about her like a little girl, but at the same time you feel that she is fearless. With her, this part was just unique.”

As for what Rihanna thought of the film, and her performance, Besson-Silla said, “When she saw the film, at the premiere, she was giggling the whole time. I think she was so happy.”