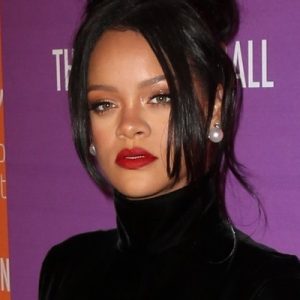 Rihanna, a happy and successful woman, held the Fifth Annual Diamond Ball and was joined by handful of famous friends.

Before she hit the red carpet, she was spotted arriving at the venue in Fenty and Balenciaga.

Via People: On Thursday, the singer, 31, declared she’s “really happy” as she stepped out at her 5th annual Diamond Ball, wearing a black Givenchy Haute Couture mermaid gown, red lipstick and pearl earrings.

“I mean I’m really happy right now. The thing that’s making me the happiest tonight is seeing the amount of support, the magnitude of support is really special. I mean I could be out here and throw a ball by myself and I’d feel good, but the thing that’s making me feel this high on cloud 9 is seeing people who believe in my cause and think it’s something worth donating to, something worth investing in.”

Via ET Online: Rihanna is setting the record straight about recent rumors claiming she’s going to be playing Poison Ivy in an upcoming Batman movie.

The singer, actress and fashion mogul stunned on the red carpet at her 5th Annual Diamond Ball benefiting the Clara Lionel Foundation at Cipriani Wall Street in New York City on Thursday, and she spoke with ET about speculation that she’d recently hinted at the casting news on Instagram.

The rumor mill began working overtime on Sunday when she shared a video of her black leather-rubber boot, a design from her own clothing company, and compared it to the Batmobile.

“Bat-mobile, but make it fashion!” Rihanna captioned the clip. “Get into this matte leather-rubber fusion tho. @fenty.”

That was enough to get overeager fans worked up into fervor over the idea that she’s joining the Batman/DC universe, and — considering her penchant for dying her hair bright red — she might be playing Poison Ivy. Meanwhile, others suggested the black boot could hint at her possibly playing Catwoman.

When asked about the possible “hinting,” Rihanna responded, “Wait did I hint anything?”

“Oh that?! Really? That!? Are you serious?” she added, baffled, at the idea of her leather boot video leading to the speculation. “No that has nothing to do with Poison Ivy.”

That being said, Rihanna quickly admitted that her love for Batman is real — even though she claims she’s got nothing to do with the future of the franchise (as of yet).

“That [post] has to do a lot with Batman [because] I have separate obsessions,” Rihanna revealed. “I have bigger obsession with Poison Ivy, I’m just being honest. And yeah, I died my hair red because of Uma Thurman in the original.”

Just because that post had nothing to do with any casting rumors, that doesn’t mean she’d turn down the opportunity.

“You know what, they didn’t call me yet. But if they did, I would love to go in and try out because Poison Ivy is one of my obsessions in life,” she shared. “I did it for Halloween one year, I mean come on!”

Meanwhile, another life-long passion for the singer has been her philanthropic endeavors, which is how her star-studded annual Diamond Ball began in the first place, and has been going strong for five years.

“I’m really proud of the fact that people come back year after year. I’m also really proud of the fact that we have a lot of newcomers every year,” Rihanna shared. “Every year, we have new people showing up, we have new buyers of tables, we have new performers who lend their talent and their gifts. I mean, they don’t have to. They have so much going on in their lives. [So] I think it says a lot about them. Because I can believe in something, but I cannot make anyone believe in, and for them to give their heart, their gifts, their life, their day, their time, their donations, it means a lot and it’s something that cannot go unacknowledged.”

Rihanna Knows How to Throw a Party

Via TIME: The ladies’ bathroom at Cipriani Wall Street in downtown Manhattan is a palatial marble space. But the stalls are small. Rihanna, in a black velvet gown with a dramatic trumpet-flared hem that stuck out several feet, didn’t seem bothered by the constraints. The singer, fashion and beauty mogul and philanthropist was hosting her Fifth Annual Diamond Ball in the venue, and she knew just what to do with her unwieldy skirt in those bathroom stalls. When asked how she fit, she had a quick answer: “Like this — like an upside-down umbrella, sis,” she demonstrated helpfully to TIME, flipping her dress up, before waltzing out to share a meeting of the minds with Kehlani and Megan Thee Stallion.

It may be just another night in the life for Rihanna. But for the 600-odd guests at the Diamond Ball supporting her Clara Lionel Foundation, it was a verified starry evening featuring host Seth Meyers and performers including Pharrell Williams, DJ Khaled, Fat Joe, G-Eazy, Megan Thee Stallion, A$AP Ferg, Fabolous, Yo Gotti, and even Rihanna herself, coming in for a first-ever live performance of the song “Lemon” — to the surprise and delight of everyone assembled. (Even at her extravagant Savage X Fenty fashion show earlier in the week, Rihanna declined to sing, preferring just to dance. And after a three-years-and-counting wait for her next album, the fans are hungry.)

Via Vanity Fair: “I never do these things,” Pharrell Williams told the crowd at Rihanna’s Diamond Ball on Thursday night as the Salt-N-Pepa sample on “Move That Dope” started to play. “But for the foundation…”

In his shorts tuxedo at the annual black-tie charity event to benefit Rihanna’s Clara Lionel Foundation, he rapped his verse on the song.

It was one of many stops on a guided tour through his rapping, singing, and production discography. The pleading melodies he sung on “Frontin’” and “Beautiful” were followed by the beats he comade for “Hot in Herre” and “Milkshake.”

“This one of my idols!” A$AP Rocky enthused as he moved closer to the stage. “Hollaback Girl,” in particular, appeared to be a favorite of his. Eventually, Pharrell coaxed the host onstage to rap her verse from “Lemon” for what he swore was an unplanned performance. Afterward, she walked through the crowd smoking.

Now in its fifth year, Diamond Ball, held at Cipriani Wall Street, supports the global relief and education foundation that Rihanna founded in 2012. Inside, 2 Chainz and Trae Young talked in a corner by themselves for a bit, presumably about the upcoming Atlanta Hawks season. Offset sat with Cardi B and her floor-swallowing dress train. Karlie Kloss held court near the stage.

“Everybody’s at the bar,” Rihanna said at one point. “That’s a good sign, that’s always a good sign.” Shaun King won one of the night’s two awards and gave a speech on a day when he’d been in the news for less celebratory reasons, but by then most of the guests had seemed to divert their attention from the stage. The event followed Rihanna’s Savage X Fenty show on Tuesday, and sure enough, attendees could stop by Fenty beauty or lingerie outposts in the room’s corners.

As a matter of efficacy and fun, it helps that the foundation and the event are helmed by Rihanna. Seth Meyers hosted: “Now when I hear Rihanna sing, ‘Bitch better have my money,’” he said, “I like it even more because I know that money is being used for charitable purposes.” In an auction that offered a hangout with Serena Williams and trips to Barbados, Cardi B opted for a one-of-ten Phaidon Rihanna book for $111,000.