Dior has expanded its collection of high-profile muses and ambassadors with Rihanna as the latest power beauty to become the face of the brand. Steven Klein photographed Rihanna in “Secret Garden IV,” a campaign and short film shot inside Versailles, that will drop May 18. She joins the elite ranks of Charlize Theron, Natalie Portman, Marion Cotillard and Jennifer Lawrence on Dior’s image quest.

Asked what drew Dior to Rihanna and how the edgy pop star fits in with its current roster of faces, Dior chief executive officer Sidney Toledano said,

“Jennifer is also edgy, I think. They understand. They’re smart. In this short movie, [Rihanna] knew how to work with Versailles. She has this kind of elegance — we saw it from the very first moment — and then she can surprise. She can be unexpected and we like it. It’s part of this personality.”

Rihanna has made multiple appearances at Raf Simons’ Dior runway shows and is also a fan of his own collection. Whether the Dior/Rihanna relationship will be ongoing has yet to be determined. 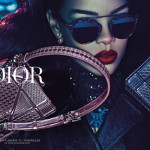 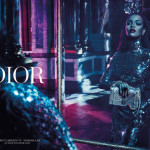 This is the fourth installment of the “Secret Garden” campaign series, which launched in 2012 and was shot by Inez van Lamsweerde and Vinoodh Matadin. Rihanna was styled by Mel Ottenberg, with whom she routinely works, wearing looks from the Esprit Dior collection shown in Tokyo in December 2014. The nighttime shoot follows her through the Salons of the Gods and dancing in the Hall of Mirrors, with a new song, “Only If for a Night,” from her upcoming album as the main soundtrack.

“[She is] a goddess but accessible. The way she moves is part of the young generation.”