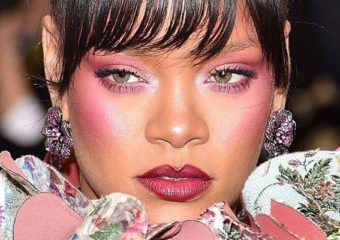 Rihanna has joined the list of speakers at Vogue’s inaugural Forces of Fashion conference on October 12.

What’s a pop superstar with a burgeoning movie career doing on a fashion panel among the likes of John Galliano, Marc Jacobs, Stella McCartney, and Balenciaga’s Demna Gvasalia? As anyone who reads Vogue knows, the four-time cover girl is more than a chart-busting diva with more online downloads than any other artist and a star of next year’s Ocean’s Eight.

She’s a fashion mogul whose every chameleonic outfit change is chronicled online. Indeed, outfits like the sheer, Swarovski-encrusted fishnet number she wore to the CFDAs in 2014, and her electric yellow Guo Pei–designed 2015 Met Gala gown have been known to “break the Internet.” That’s the red carpet, but her off-duty looks are just as influential. Rihanna has brought her glamorous, body-confident sensibility to the sportswear giant Puma, where she’s been the women’s creative director since late 2014.

Tickets to her Fenty x Puma shows in Paris were highly prized, not just for the sexy tomboy basics and brilliant best-selling shoes she served up, but also for their unbridled sense of fun. Last March, Slick Woods, Joan Smalls, et al. stormed down the reading tables at the Richelieu-Louvois Library; the season before, Rihanna filtered the extravagance of Versailles with state-of-the-art gym gear. New York Fashion Week will be lucky to have her back next month—don’t miss Vogue’s online coverage of her show on September 10.

All of these topics and much more will be on the table when Rihanna sits down at Milk Studios on October 12.