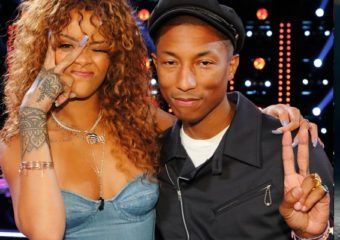 We are all Rihanna Navy. If you don’t believe that, wait till Rihanna’s song plays in a club you’re at… you will see there will be hardly anyone who is not getting their life to it. Even though, Rihanna’s last solo album ANTI came out almost two years ago, she does not forget about her fans and from time to time a collaboration with other artists gets released. And Rihanna is a collaboration force that cannot be ignored. She brings life to any song she is featured on. Her unique vocals and versatile style makes artists from different genres dying to record with her.

In 2017 we got four amazing collaborations from her: Selfish, Loyalty, Wild Thoughts and Lemon. Let’s take a look at all of them. You will see that each song is different and shows an unique Rihanna. It’s time for some listening party!

A collaboration we were waiting for mostly because of its predecessor: Loveeeeeee Song from Unapologetic album. The song premiered on February 24th, 2017 and Rihanna’s vocals are what received the most praise from not only fans but also the critics. The song spent 10 weeks and peaked at no. 37 on Billboard Hot 100 but was recently certified platinum in the United States.

Loyalty, loyalty, loyalty! The song by Kung Fu Kenny and Bad Gal RiRi was released on April 14th, 2017 and the music video on July 28th. When speaking of Rihanna in one of the interviews, Kendrick said:

The song was Rihanna’s 16th number 1 single on the Rhythmic Songs Airplay chart. Loyalty spent 26 weeks on Billboard Hot 100 and peaked at #14.

Fun fact: When Loyalty hit number 1 on Rhythmic Songs airplay chart, Rihanna knocked herself out of the throne, as Wild Thoughts was occupying the top for eight weeks.

If it wasn’t your summer hit then I don’t know what was. Released on June 16th, Wild Thoughts soon became everyone’s favourite song to party to. Accompanied by a music video and sampling Carlos Santana’s Maria Maria, the song peaked at #2 on Billboard Hot 100 and was certified double platinum in the United States. The song gave Rihanna her ninth number 1 in the United Kingdom. Wild Thoughts was Rihanna’s 31st number 1 on Dance Club Songs. On Radio Songs Chart, the single became Rihanna’s 13th number one song and seventh chart topper on R&B/Hip-Hop Songs chart.

Released yesterday and accompanied by a video featuring dancer Mette Towley, a song we all needed in those sad times. The release was rather unexpected but the world is already in love with this fun song! Rihanna as a rapper? Yes, please! Kinda funny how Rihanna can rap better than some rappers out there but this is what she usually does…slays everyone. The song already reached Top 10 on U.S. iTunes. Support it now!