“The face, the body, the confidence—the magnetism that she has is just ridiculous,” says makeup artist Kabuki of W’s September 2014 cover star, Rihanna. “That can’t be learned.”

This shoot was Kabuki’s third time working with the pop star—the first two times were for her videos “Where have You Been?” and “Princess of China”—and the artist knew to come prepared.

“I got the vibe that it was slightly animalistic, but also could be interpreted as tribal or survivalist—definitely somebody using their environment as part of their style,” he explains.

For the application, Kabuki chose unconventional materials like sponges, cut-up fan brushes, and a wooden tool used for ceramics, a method he picked up while working in the film industry.

“I did the makeup like it was an abstract painting,” he says.

Though her face is covered in bold treatments of red, blue, white, and black, it is still clearly Rihanna.

“She doesn’t need crazy makeup to be interesting,” explains Kabuki. “But if you do something strong on her, it’s not going to overwhelm her. She’s going to own it.” 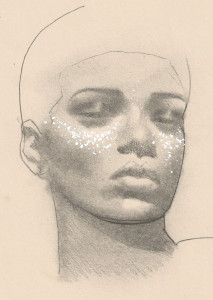 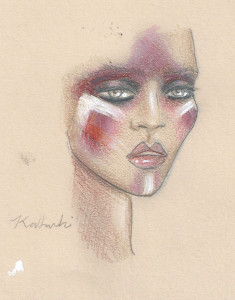