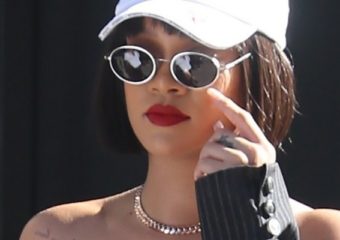 Rihanna is back in New York after leaving the city last week following taking part in Vogue’s Forces of Fashion conference and Puma’s Pep Rally. Bad Gal RiRi was spotted out and about in New York yesterday rocking new, short hair and pinstripe dress. She completed the look with Off-White heels with transparent outer sleeves, white baseball cap and fashionable round sunglasses. However, the real star of the outfit was the money roll clutch of the moment designed by Alexander Wang. It has became celebrities’ favourite lately and it is clear why!

Rihanna was recently named the Greatest Pop Artist of All Time, based on Billboard’s date. Despite having arrived on the chart halfway through its existence, Rihanna proved to be a consistent artist who releases not only great music but is also very successful in doing so. Despite being in the industry for only 12 years, Rihanna’s impact is undeniable.