Rihanna owns the world with only 4 hours of sleep

What does it take to become Rihanna? Less than four hours’ sleep per night, apparently. The Wild Thoughts singer shares insights into her personal life and inspirations as guest editor of the December issue of Vogue Paris, scheduled to go on sale on Dec. 1. The issue comes with three separate covers shot by Inez Van Lamsweerde and Vinoodh Matadin, Jean-Paul Goude and Juergen Teller. 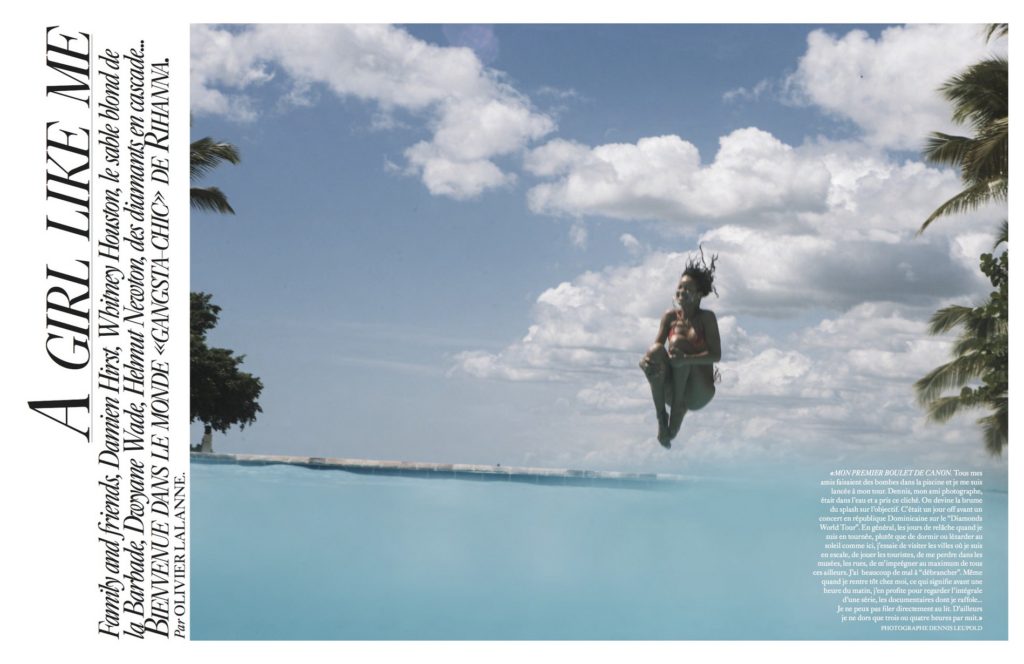 A section titled A Girl Like Me opens with a candid shot of Rihanna dive bombing into a pool in the Dominican Republic. In the accompanying caption, she reveals that she usually likes to spend her days off on tour sightseeing rather than sunbathing.

“I have a lot of trouble switching off. Even when I get home early, which means before 1 a.m., I start binge-watching shows or documentaries, which I love. I can’t go straight to bed. As a matter of fact, I only sleep three or four hours a night,” she is quoted as saying in the French text.

Rihanna also chose a picture of Princess Diana wearing a black off-the-shoulder gown, often referred to as her “revenge dress,” to the Serpentine Gallery’s summer party in 1994. The outing occurred on the same night as Prince Charles confessed to having been unfaithful in a TV documentary.

“Every time a man cheats on you or treats you badly, you need a revenge dress. Every woman knows that. But whether her choice of this knockdown dress was conscious or not, I am touched by the idea that even Princess Diana could suffer like any ordinary woman. This Diana Bad Bitch moment blew me away,” she said.

In a section that mixes backstage moments from video shoots with childhood snaps, Rihanna – who regularly delights her 58 million Instagram followers with revealing images – says she is much more comfortable performing on stage than on a film set or photo shoot.

A childhood anecdote reveals she always yearned to be the center of attention.

“I remember a birthday party my parents had organized at home for a neighbor, Michelle, a childhood friend. I must have been three or four years old. Everyone was dancing around her in the living room and I couldn’t stand the fact that at that precise moment, I wasn’t the center of attention,” she recalled. “I snuck upstairs and got changed. I put on a pink and yellow swimsuit and an African print jacket with an orange hood. There is a video of this scene. You can hear everyone calling, ‘Robyn, where’s Robyn?’ Then you see these four fingers sliding down the bannister as I come downstairs. It’s hilarious,” she said.