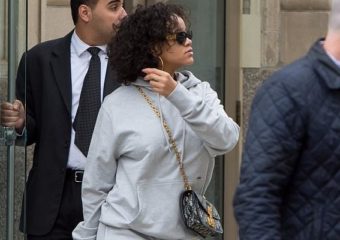 Rihanna was photographed leaving her New York apartment in a grey tracksuit and yellow heels today (October 26).  She completed the look with a Dior bag. As you can see, RiRi is still rocking short, curly hair which she debuted a couple of days ago.  On Tuesday (October 24) Rihanna was supposed to take part in WWD’s Apparel + Retail Summit but in the end she did not attend the event.

In other news, Rihanna’s recently released Puma collection helped drive sales growth at the company, which last week raised its outlook for 2017 sales and operating earnings.