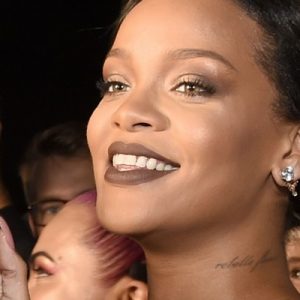 Rihanna unleashed the wild beast in a lush tropical land that turned to arid desert with women of all shapes, sizes and colors writhing, cackling, frolicking and stalking like animals in lace, fishnet and satin that shined in jewel tones for her second season of Savage x Fenty.

Rihanna’s exotic world of bralettes, undies and pajamas that come in 50 looks had a setting close to the nature. There was a plant growing station, a pond, hydroponics and botanical biodomes. All of this she constructed inside a cavernous building in the Brooklyn Navy Yard as New York Fashion Week ended on Wednesday.

“My mission is to just have women all over the world feel comfortable and sexy and have fun with lingerie,” the pop star, fashion maven and beauty mogul told The Associated Press backstage after the unique show that had her crowd cheering. “I think tonight was just one of those experiences that I wanted people to feel that energy. I wanted them to feel all the different body types, all the different women in different stages of their womanhood.”

FEARLESS LINGERIE: #Rihanna unveils her #SavageXFenty collection at #NYFW with a celebration of women’s bodies and says she doesn’t see herself as a mogul, despite working in fashion, makeup and music. pic.twitter.com/sdkHq8biS7

Rihanna’s “beasts” came tattooed. They included two pregnant women showing off their swelled bellies with pride. Another was a nymph in neon green. The famous model sisters Gigi and Bella Hadid were there, the former in browns, Bella in a soft blue.

What it means to be a Savage?

All moved slowly through choreography at times, some beneath a waterfall, amid a set alive with fauna, greenery wending up two dome structures that moved slowly around as Rihanna’s women slinked in and out. At other times, women grouped together exploring their bodies as trios. One was very, very good at the splits.

“When you hear the word savage, it’s pretty self-explanatory. It’s a confident word. It’s a word that is fearless, and I feel like the women here tonight represented that word, savage, and I feel every woman has a savage inside of them, whether they found it or not –  it’s there.”

Asked about being a mogul who is successful in different areas such as music, fashion, film and beauty, Rihanna said:

“That’s a word I’ve never actually used to describe myself. ‘Mogul.’ I’m just having fun, doing things I love to do. I love to be creative, whether it is lingerie, music, makeup, design, apparel. I am never gonna get bored out here. That is the good news.”

Via The Associated Press

Rihanna’s brief foray into luxury fashion with LVMH Moët Hennessy Louis Vuitton has come to a halt, WWD has learned....

Rihanna and Savage x Fenty are taking over Amazon Prime one more time on October 2nd, when the Savage X...