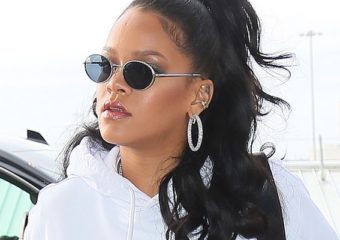 After attending the Fenty Puma Pep Rally, Rihanna changed into an all-white outfit and headed to the JFK Airport in New York. Before the take off, she shared a photo of herself on Instagram. Rihanna has had quite a successful week. She took part in Vogue’s Forces of Fashion conference, dropped Galaxy collection and dropped another Creeper. Her next destination is unknown but rumour has it she was on her way to Barbados. How do you like her airport style?

Rihanna took part in Vogue’s inaugural Forces of Fashion conference on October 12, 2017. The discussion was led by Hamish Bowles, the international editor at large. Rihanna was asked about her Fenty Puma fashion shows, Fenty Beauty’s impactful launch and what she finds exciting in the fashion world lately. She also spoke about her infamous Met Gala look from 2015 and how much effort it took to pull this look off.

Rihanna is always excited to celebrate success with her fans. Puma organised a pep rally at Bloomingdale’s in New York on Friday, October 13 and Rihanna could not miss it. She talked about her high school years, what she enjoys on TV right now and about her secret fashion weapon.

In another interview conducted during the event, Rihanna was asked about dressing appropriately to her mood, Instagram trends and why flip-flops should never be worn by men to an event. She also shared her secret to coping with a bad week so if you need some wise words, here they are.