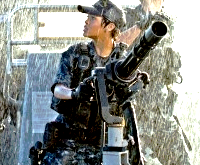 Pop superstar Rihanna and Canadian actor Taylor Kitsch will attend the Australian premiere of the film Battleship in Sydney next month. Rihanna, who makes her acting debut in Battleship, will be joined by the film’s director Peter Berg and Brooklyn Decker at Luna Park on April 10. Based on a video game, Battleship is an action-adventure film where the planet Earth is under attack from a superior force. The battle to combat the invading forces takes place on land, in the skies and on water. Liam Neeson heads the cast that includes Alexander Skarsgard.

"Battleship", which stars Rihanna, Taylor Kitsch, Liam Neeson and True Blood's Alexander Skarsgard, has held on to its Number 1...

Via OfficialCharts: Rihanna may be an old hand at scoring Number 1 singles and albums, but now the Bajan singer...

Via Entertainment Weekly: When director Peter Berg told EW earlier this year about offering Rihanna the role of a tough...

Only a few more days until the year's biggest aliens-at-sea adventure movie "Battleship" sails into theaters. In addition to the intrigue surrounding...

They’ve been all over the globe doing promotional events, and tonight (May 10) the cast of “Battleship” showed up in...

Rihanna is attending the Los Angeles premiere of her first movie 'Battleship' tonight. You can watch the premiere live on...