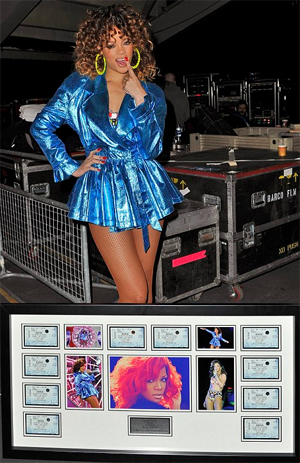 Last night, Rihanna wrapped up her almost 100 date LOUD Tour in London, O2 Arena, performing there for the 10th time. Rihanna managed to sell out the Arena 10 times, thus making her the first female artist to have 10 dates at the O2. She was awarded with an award in recognition of breaking the record for the most sell-out dates at the venue by a female artist.

Rihanna will have performed to more than 170,000 fans over 10 nights, beating Britney Spears who packed houses over eight nights in June, 2009, during her Circus world tour.

‘We at The O2 felt that this amazing record could not pass unrecognised and as Rihanna has spent so much of her time in London at our venue, we wanted to give her something to remember us by. We hope to see her here again very soon.’