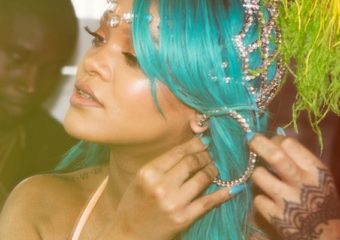 Rihanna earns her 13th leader, while DJ Khaled and Bryson Tiller each earn their first. Plus, the song’s guitar hook makes a return to No. 1.

As reported in yesterday’s Billboard Hot 100 top 10 recap, DJ Khaled’s Wild Thoughts, featuring Rihanna and Bryson Tiller, takes over atop the all-genre Radio Songs airplay chart, up 6 percent to 135.1 million in audience in the week ending Aug. 13, according to Nielsen Music. On the Hot 100, Thoughts holds at its No. 2 Hot 100 high for a fifth week.

Rihanna achieves her 13th Radio Songs No. 1, extending her record for the most leaders in the history of the chart, which began in 1990. Khaled and Tiller each celebrate their first leader on the list. Here’s an updated look at the acts with the most Radio Songs No. 1s:

Rihanna first reigned on Radio Songs with Umbrella, featuring JAY Z, for four weeks in 2007. Umbrella became her sixth entry on the tally; she had first charted two years earlier with her debut hit “Pon De Replay,” which reached No. 3 on Radio Songs.

Perhaps surprisingly, Thoughts is Rihanna’s first No. 1 on the chart since early 2014, when Eminem’s The Monster, on which she’s featured, wrapped a six-week rule. Since then, she scored two No. 2 hits (Work, featuring Drake, and This Is What You Came For, by Calvin Harris featuring Rihanna, both in 2016), while she reached No. 3 in March with Love on the Brain.

Also notably, the guitar riff in “=Thoughts makes its second trip to No. 1 on Radio Songs: the song samples Santana’s Maria Maria (featuring The Product G&B), which topped the chart dated April 22, 2000.

One thought on “Rihanna Extends Record for Most No. 1s on Radio Songs Chart”