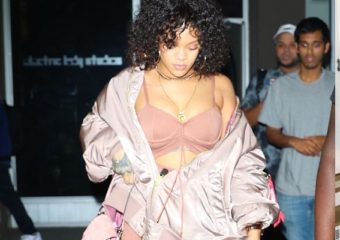 Rihanna looked gorgeous as she made her way out of the Electric Lady Studios last night. The famous recording studio was established by Jimi Hendrix in 1970. She totally owned that pink outfit! She even shared some photos on Instagram. Earlier that day, Rihanna was spotted heading to the gym.

A couple of days ago I reported that Rihanna started working on a new album. In one of the interviews, British singer Shakka said:

“She’s definitely coming out with new stuff. The songs that we heard in that session, in that writing camp, were insane. It was absolutely insane. So I’m looking forward to it. Hopefully a bunch of my tracks make the album too. I don’t even know the direction. You know what Rihanna’s like. You can’t anticipate anything. It’s just a bunch of different songs that are like ‘I didn’t think she would do that’ – it sounds sick.”

With news like that, we are excited to see photos of Rihanna at recording studios.

On Tuesday, October 24, Rihanna will attend WWD Apparel + Retail CEO Summit in New York. She is expected to talk about her Fenty x Puma clothing and shoe line, her beauty launch and other projects. The event will gather top leaders of fashion, retail and beauty’s industries.