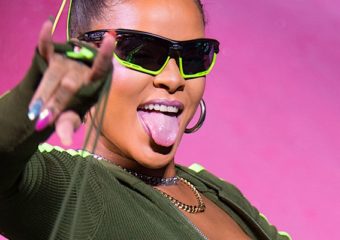 In stark contrast to the standard-issue runway Tom Ford set up at the venue days before, Rihanna’s team transformed the room into a glittering pink mountain range, with pastel peaks made of sand rising from the floor.

As if the setting wasn’t stunning enough, the show opened with a scene that deserves to go down in NYFW history, featuring four high-flying motorcyclists somersaulting over the mountains, coming scarily close to the light rigs mounted on the ceiling.

Once the bikers safely landed, the presentation began of Rih’s futuristic-yet-wearable visions of athlesure and swimwear, in front of an audience including Ashley Graham, Cardi B, Whoopi Goldberg, Ty Dolla $ign, Offset, Big Sean, Jhene Aiko, Joey Bada$$ and more.

The show concluded with the models circling the mountains as the bikers zoomed over their heads, ending with Rihanna herself on the back of a bike, circling the crowd and waving. It was an iconic finish to an unforgettable night.

It’s a Bird, It’s a Plane, It’s a Stuntman (Probably)Thank god the Park Avenue Armory has high ceilings. That specific structural detail allowed Rihanna to fit two ramps right at the center of her sandy set for motorcyclists to ride up and fling themselves off of. There were flips, leaps, and some truly terrifying—or super cool, depending on your predilections—stunts done by some professional riders in professional clothing. No Fenty x Puma creepers here.

Slick Woods Is Rihanna’s Go-To GirlSlick is back for Rihanna’s Spring show. The Los Angeles-raised model opened Rih’s previous show in Paris, and modeled in the one before that, making her something of a mainstay in the world of Fenty x Puma. Add to that a spot in Rihanna’s new Fenty Beauty campaign, and you’ve got the makings of a real designer-muse relationship.

The Creepers Remain, And There’s a New Shoe in TownStart working on your balance because Rihanna’s new shoe is a stiletto-heeled flip flop. The models pulled them off with aplomb—will us mere mortals be as lucky?

The Clothes Are Day-Glo Athleisure with a SoCal TwistAfter a day on the dirt bike comes a night on the beach, at least in this version of Rihanna’s world. Motocross staples like enlarged logos, loose trousers, and utility straps mixed with surfer musts like scuba fabrications and skin-hugging silhouettes made for a look that was loose and easy. Well, until it came to those lace-up bathing suits. Your name has to be Rihanna to pull those off.

Rihanna kicked off the New York Fashion Week in style. Last night she hosted a party in honor of her...

It is time for a quick update on what is going on in Rihanna world recently. Enjoy! Rihanna celebrates new...