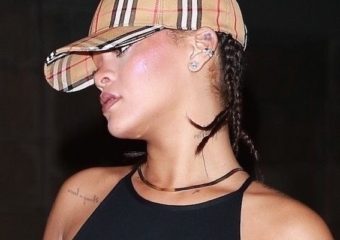 Rihanna was photographed out and about in New York last night. She showed off her flawless figure in a black dress and Burberry hat and coat as she headed for a late night dinner. See that make-up? Of course, you guessed right! It’s the Fenty Beauty Galaxy collection and it looks amazing on brand’s creator. The collection drops October 13th.

After the dinner, Rihanna and her friends headed to SZA’s concert at The Box in New York. SZA’s is featured on ANTI’s opening song, Consideration. We love to see talented women support each other!

Yesterday Rihanna shared some casual photos of herself wearing Molly Goddard dress with sneakers on her Instagram. As expected, her make up was created using the Galaxy collection.

Tomorrow Rihanna will speak at the inaugural Vogue’s Forces of Fashion Conference at Milk Studios in New York. She will speak during the Pop Goes the Fashion World panel alongside Hamish Bowles, the international editor at large for Vogue.