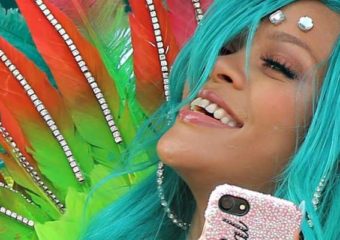 It’s Rihanna’s favorite day of the year. In other words, it’s Kadoonment Day (Kadooment is a bajan term for a big, fun-filled occasion) in her native Barbados, which means she’s pulled out all the stops for the island’s annual Crop Over Festival. For the event’s carnival-style parade, the beauty renegade debuted a new supercharged take on turquoise hair color, looking like a Manic Panic’d Veronica Lake with glossy, side-swept faux waves that artfully concealed one eye. And her go-big-or-go-home beauty didn’t end there—she added lush lashes, a slick of pink lip gloss, and a row of geometric, forehead-grazing facial jewelry to the mix.

Riding on a float sponsored by the band Aura Experience, Rihanna came decked out in a custom beaded and feathered look by local designer Lauren Austin, who has worked with the singer on her over-the-top festival attire since 2013.

“I’ve been designing Crop Over costumes for around seven years,” Austin explains. “I met Rihanna through Matthew Ashby and her brother Rorrey Fenty.” She adds, “I love how daring Rihanna is—her style is edgy and she isn’t afraid to wear whatever she wants, when she wants.”

For this year’s parade, Austin sent several sketches to Rihanna to choose from, and true to form, she picked the wildest one.

“When I first saw which look she chose, I thought wow, everyone will be shocked—the neon, the iridescent crystals, it’s totally different from what she’s done before,” she says.

Surprisingly, it took Austin only one day to complete Rihanna’s Crop Over ensemble.

“The costumes are all made in my studio located inside Christ Church in Barbados,” Austin notes. “I do have a full team who deals with mass production, but all of the individual costumes are hand made by me.”

The festival is a feast for the eyes, and with Rihanna front and center this year, there’s even more glitter and glamour to get excited about.

“Crop Over used to be celebrated with people wearing simple T-shirts,” Austin says. “Over the years however, designers started getting creative. Today it’s very important to dress up in full costume to really and truly feel the Crop Over vibe. It’s exhilarating, free, and radiant.”

Billboard Style scored an exclusive interview with Destiney Bleu, a designer who helped contribute to the look of Crop Over 2017’s biggest star.

For Bleu — the owner of DBleudazzled (a line specializing in bedazzled costumes and lingerie) — the news that she’d be designing for one of the world’s top musicians came as a quick surprise. She woke up to an email from an assistant of Rihanna’s stylist last Wednesday alerting her that the singer wanted a pair of tights for a Crop Over outfit. After researching the significance of Crop Over, Bleu immediately designed two bedazzled pairs of tights — one in nude, the other in black.

There was much anticipation as Rihanna’s team picked up the options the next day, Bleu wondering all weekend “is she going to wear them?” On Monday, the designer was pleased to see her name and the company’s “tagged under [various] Instagram” posts: Rihanna had selected the nude pair of crystallized fishnets.

Amongst the high profile clientele for DBleudazzled — including Beyoncé, Shania Twain, and Lady Gaga — this is Rihanna’s first time sporting the line. “We pretty much accomplished bedazzling everyone, the only one left was Rihanna,” bragged Bleu about her latest accomplishment. The designer claims she knew the time was nearing when her and her team “kept hearing ‘Wild Thoughts’ every time we’re together.” With excitement, she attributes this career highlight as “a group manifestation!”

With her Crop Over outfit Rihanna also scored two most liked posts on her Instagram page. I love how happy, healthy and beautiful she looks!