With a little over a week to go, Eminem and Rihanna are putting the final touches on “The Monster Tour.” The Detroit rapper has shared the first photo of him and RiRi in rehearsals for the stadium shows.

The three-city trek kicks off with two concerts at the Rose Bowl in L.A. on August 7-8 before heading to MetLife Stadium in East Rutherford, New Jersey, on August 16-17, and Detroit’s Comerica Park on August 22-23.

Eminem’s manager Paul Rosenberg teased the epic outing, writing, “I’m not going to tell you how crazy these Monster shows are going to be. I’d never do that.” 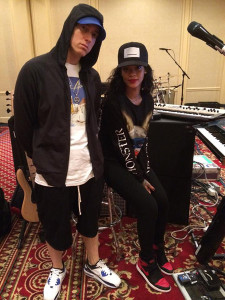 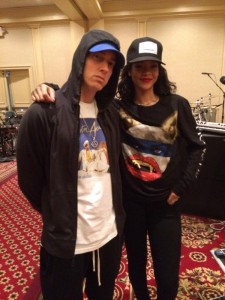 Meanwhile, Rihanna fans can purchase some exclusive merchandise when the show comes to their city.

“I am thrilled to announce that #TRAPSTAR teamed up with us on the OFFICIAL MERCHANDISE exclusive to #THEMONSTERTOUR Can’t wait til u see dis,” tweeted RiRi.

Rihanna looks fierce as she dines at Giorgio Baldi restaurant in Santa Monica on Thursday evening. Dressed in all-white, Rihanna...

Rihanna is currently in Europe where she is blessing her fans with amazing ANTI World Tour shows. On July 12...

It's almost time, Navy! Rihanna's highly anticipated world tour starts tonight. She will kick off the ANTI World Tour in...

Rihanna's highly anticipated 2016 tour is growing bigger and bigger. 5 more dates have been added to the ANTI World...

The massive worldwide tour will kick off in North America in February, with nearly 40 shows lined up from coast...