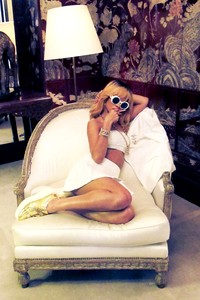 The Coveteur x Lurve Magazine: Between this and love for all things RiRi hearts M.A.C., it may seem that as of late, we’re fangirling for a certain someone a little too hard. What, doesn’t everyone have a ‘Rihanna dress’ in their closet à la Kelly Oxford? Or spend time trolling online for the same Jennifer Fisher jewels that the Only Girl in the World herself has been wearing as of late? Let us explain: if you, like us, are one of Rihanna’s gazillion Instagram followers, you may recall (rih-call?) seeing (and double-tapping) a few snaps from her recent Paris jaunt. A tour of Coco Chanel’s apartment, a private dinner with Azzedine Alaïa, a fitting with Laetitia Crahay… you know, what everyone manages to squeeze in when they have 36 hours or so to spend in the city of lights. And who better to show @badgalriri a good time than Miss Lyna Ahanda, editor-in-chief of Lurve Magazine and our very own Paris liaison?

Sending over a few shots of her own (this ain’t no #rih-post, kids), Ahanda also filled us in on her day out with Rih. Visiting Coco Chanel’s one-time apartment (somewhere that, ahem, we’re not exactly strangers to ourselves) with Laetitia Crahay in tow, Rihanna gave her take on the classic CHANEL tweed in an all-white short suit, gold creepers and jewelry; lounging on the chaise where Coco herself once did the same. Afterwards, they made their way over to the Maison Michel office and showroom, where Rih tried on a few of Crahay’s signature headpieces and embellished bunny ears, picking up a few pieces for herself. Then, it was over to a private dinner to celebrate Rih, over at Alaïa’s Parisian HQ—with Mr. Alaïa himself, as well as Olivier Saillard, curator of Paris’s Musée Galliera, in attendance. Lurve’s Kristen Noël Gipson styled Rihanna and BFF Melissa Forde in all-Alaïa-everything just for the occasion. After dinner, Mr. Alaïa brought out a cake (and it’s not even her birthday) for dessert. Not too shabby, right? The things we would give to be a fly on the wall.