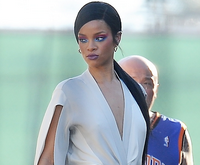 Via MTV: By now, you’ve probably seen the video for Coldplay’s “Princess of China.” It stars Rihanna as a Shiva-esque deity who waves her (many) arms back and forth in time with the tune but strangely does not actually feature Coldplay themselves.

The clip began making the rounds earlier this week and was not only touted as the “official video” but earned raves from fans of both acts. There’s only one problem: It is most definitely not the actual “Princess of China” vid.

In fact, it’s part of Coldplay’s live show, a video they play during their performance of the song (as several Coldplay aficionados have been pointing out on YouTube). Just to clear up any confusion, we reached out to a spokesperson for the band, who told us in no uncertain terms:

“It isn’t the official video. … It is, in fact, a clip that the band are using during their performance of the song on tour.”

So there you have it. Of course, this raises the question of just when the real “Princess of China” video will premiere. After all, going by photos RiRi previously tweeted, the clip was filmed back in March. So, once again, we went to Coldplay’s rep, who told us that the “Princess” video is still a few weeks away from debuting.

“It won’t be finished until the third week of May,” the spokesperson said. “It’s going to be a minute.”

Rihanna's lips are perfect. Her cupid's bow is out of this world and she proved that by sharing an extremely...

The real star of Lemon, the surprise collaboration between N.E.R.D. and Rihanna, is dancer Mette Towley, who powers through the...

We are all Rihanna Navy. If you don't believe that, wait till Rihanna's song plays in a club you're at......

Just released! New song and music video from N.E.R.D and Rihanna - Lemon. The song was released with a music...