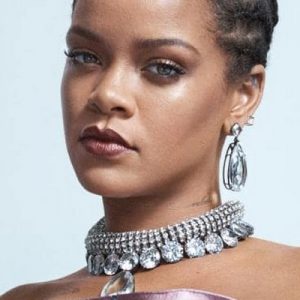 For anyone else it would be tough to put women dressed in underwear centre stage. And to be taken seriously by women? Forget it. But Rihanna, who does just that with her lingerie line, knows inclusivity and knows what women might want. It’s a knowing that’s seemingly second nature to our ‘kween’ of heart and soul.

Since her Savage X Fenty lingerie debuted one year ago, she has taken a completely and undeniably empowering approach to the business of making us feel really good about ourselves from the inside out, whatever our body type, culture, age or life stage. She has channelled her own intuition about how things in this cruel and careless world could be, and all her boundless energy has quite simply connected.

Perhaps she has managed it because she isn’t the prescriptive skinny (white) woman. She has embraced her own body type, real curves and all, and she isn’t insecure or self-conscious about it, which for a global phenomenon is unheard of. Refreshing. It comes from a good place, and for her Navy, as she likes to refer to those women who follow her – @badgalriri 69 million and rising – she naturally leads and inspires. Her position is unique.

For Vogue sitting, which took place in London long into the night, she wanted to share her own brand of Savage X Fenty, one styled with strong shapes and great tailoring and which, unsurprisingly, turned out to be super-boss. Because that’s who she is.

And so her Savage X Fenty shows and campaigns have been from the beginning a clever celebration of difference, showcasing women of different weight, height, cultures and races; women who are plus-size, pregnant, women who have stretch marks and cellulite. Yes, she is here for us all – no criteria needed. What a relief to be comfortable in our own skin. Her aim has never been to make women feel sexy: it’s always been to make us feel like us. Alive and sensual.

Her clever and extensive Fenty Beauty make-up collection, which launched almost two years ago, catering to all nationalities and skin types, had already set a new bar. Lingerie and make-up together are like a double whammy: two things women can have that don’t have to be super-showy, yet help them feel empowered. It’s about personal confidence – no need to please anyone but yourself.

Rihanna has a ‘right here, right now’ clear-sighted and inclusive attitude that women want, and so it feels good to embody a little of her essence. She ain’t afraid. All the way through her music, the legendary records, the vulnerability has always resonated and she has she let us in: sharing her emotion candidly has been one of her strengths. Body positive, mind positive. And we will run the world fortified, Fenty-fied perhaps, in some way. Hear her raw.

They seem like the most unlikely of pairings – a former Prime Minister and one of the biggest pop stars on the planet.

And yet since first meeting in 2016, Julia Gillard and Rihanna have formed an unlikely friendship based on their shared passion for promoting education in developing countries around the world.

In her role as honorary chairwoman for the Global Partnership for Education, Julia Gillard helped to recruit Rihanna as an ambassador, after first chatting over a casual dinner in New York, and has since spent time with the 31-year-old on the ground in the African nation of Malawi, where they visited several schools together.

Australia’s first female prime minister reveals why Rihanna got involved, how their relationship has developed in recent years and why she now calls herself a fan.

I first met Rihanna shortly before the Global Citizen conference [in New York, in September 2016], where I introduced a video of her on stage. I met her in the context of exploring whether or not she would want to become the global ambassador for the Global Partnership for Education (GPE), a multi-lateral fund that supports school education in 67 developing countries.

More than 20 countries are donors, so most of our money comes from foreign aid budgets, but unlike a lot of other development organisations, we didn’t have a system of ambassadors or any sort of celebrity endorsers until it was brought to our attention Rihanna was interested in doing some work to help the world, and her particular focus was education.

I had heard her name and admittedly I had heard some of the songs, but I personally didn’t know much about her or have any expertise in her music. I’d have to confess that if Vogue was recruiting for a popular culture editor, I don’t think I’d make the interview cut! Popular culture and popular music are not my forte.

We met upstairs at a casual restaurant in Soho [to discuss her becoming involved]. Clearly she had people with her and there were representatives from the GPE present as well from Global Citizens, but it was all organised on the basis that she and I would sit at the table by ourselves and have a good conversation.

I found her very warm and very casual, no airs or graces, and very eager to learn.

We had a good conversation about what the GPE did – about the challenges in our world and all those challenges for women – and how her own nonprofit, the Clara Lionel Foundation, named after her grandparents, could work alongside us. I walked away thinking she was a very intelligent, thoughtful person who wanted to keep learning about all of the complexities of the world we live in.

I believe Rihanna sees education as a real enabler.

She left school young because she was discovered young, so she’s conscious that she didn’t finish her own schooling. She talked to me about her brothers and how determined she’d been that they finished school, so I think she’s got this very personal sense that individual education really matters, and that’s why it’s so heartbreaking for her to see some children miss out, simply because of poverty and because of where they were born.

We knew that the GPE would be aiming for a major replenishment campaign in 2018 and that Rihanna’s advocacy would really matter in the run-up to this. She also rightly wanted to touch and feel the work on the ground, so that’s what created the Malawi trip [in 2017].

We were there three days and we went to a primary school as well as an all-girls high school. She didn’t conduct herself in any sort of entitled manner. Yes, she has a machine whirring that supports her work, but she’s very engaged in the moment.

She’s very keen to talk to people, very casual and very charming. No part of her conduct tries to make people acknowledge her status. She doesn’t do that at all.

In fact, we contributed to the construction of a school building [during the visit]. Rihanna was incredibly enthusiastic about running buckets of water here and there, and mixing bricks and making bricks.

She just really wanted to get right in there and get her hands dirty, and she did. At the primary school I walked around with the principal as she dashed enthusiastically from classroom to classroom talking to the kids.

She ended up being surrounded by them – they were singing an alphabet learning song and she listened and picked it up, so started singing with them. She loved the fact that they learned in melody.

Some of those primary school students knew who she was, but at the all-girls school they all knew. You know that historic footage of the Beatles first visiting Australia where they come out on the balcony to a screaming crowd? Well, it wasn’t quite a balcony, but it was certainly a screaming crowd. The girls followed her everywhere – it was amazing to watch.

Rihanna continues to support and be actively involved in the GPE’s work. She was at our replenishment in Dakar [in 2018], we were in contact in the lead-up to that, and she has also personally lobbied some key world leaders.

She tweets and motivates her followers – her Navy, as she refers to them – and there’s no doubt that has an impact on prime ministers, presidents and government ministers.

We know [her tweets] sort of shake the system and puts the heat on governments for that need to act. It gets everybody running around – presidents and prime ministers demanding answers from public servants about what’s going on, how much should they give, when should they pledge, what everybody else has given and so on.

I know ours is an unusual relationship. We are from very different worlds and we’re very different ages; her childhood was very different to my upbringing in Adelaide and the world of politics is not something she has deeply immersed herself in. Likewise, no-one would ever mistake me for a rock’n’roller or a pop icon.

But despite all those differences I’ve found Rihanna is very easy to be around, and very easy to have a conversation with.

I’ve learnt things from her about her world I didn’t know, so it’s been a fascinating insight for me. We’ve had some really interesting conversations and clearly since spending time with her, I’ve become a fan. Not only of the music, but more importantly a fan of her work and the efforts she’s prepared to make to uplift the education of every child around the world.