In the last seven years, Mel Ottenberg has helped conjure many of Rihanna’s most magical fashion moments, several of which have famously graced the steps of the Metropolitan Museum of Art. The extraordinary Guo Pei cape the singer wore to the Met Gala in 2015, for example, undoubtedly ranks as one of the most spectacular in her repertoire—not to mention the Gala’s history. (Take a closer look at paparazzi images of the dramatic ensemble, and you’ll likely spy the stylist quietly maneuvering the dramatic 16-foot, fur-trimmed train.)

Ottenberg was a relative outsider to the world of red carpet styling before he started working with Rihanna, having built a reputation in editorial with cult fashion magazines such as i-D and Purple; he stills holds a position as the editor at large of Berlin-based style publication 032c, in addition to styling cover stories for the likes of T and French Vogue. That left-of-center approach to fashion has clearly ignited the singer’s own risk-taking instincts over the years. Watching the pair at a recent fitting in Paris for Rihanna’s Met appearance, the creative chemistry was palpable. They share a wicked sense of humor and playful taste for danger, tirelessly pushing toward red carpet choices that leave the world asking what on earth Rihanna will pull out of her hat next.

Here, Ottenberg breaks down the story behind each of the Met Gala looks he’s created with Rihanna, starting with the sinuous black Tom Ford dress she wore in 2012 through to the fantastic Pope-inspired Maison Margiela couture ensemble she wore this past Monday.

2012 was the first year I styled Rihanna for the Met Gala. We had just shot the music video for “Where Have You Been,” and I was really into the custom Amazonian looks we had made for the video. I wanted her Met Ball look to reflect her mood and vision and direction at that time, and I really wasn’t concerned with the theme of the Ball at all. The Tom Ford dress she wore was a perfect reflection of her artistry at that moment. It was deceptively simple, yet the handwork to create the crocodile motif across the body was extraordinary. The runway sample fit like a glove, and actually later Mr. Ford told me he designed the dress with Rihanna in mind. Extra-long black nails and a Repossi ear cuff completed the look.

Rihanna was Stella McCartney’s date to the Charles James Met Ball in 2014. I wanted to do something minimal and incredibly glamorous—a Rita Hayworth moment. The mix of diamond jewelry I had put together excited me, but I felt like I was missing one incredible thing. At the very last second I went to the Cartier Suite and shook them down for one extraordinary, almost priceless diamond cocktail ring, thus starting an ongoing friendship with the great jeweler. Yusef Williams, her hairstylist, took the whole thing to the next level. The curly updo was perfect and happened at the last second when it all just gelled, and I knew it was really, really good. 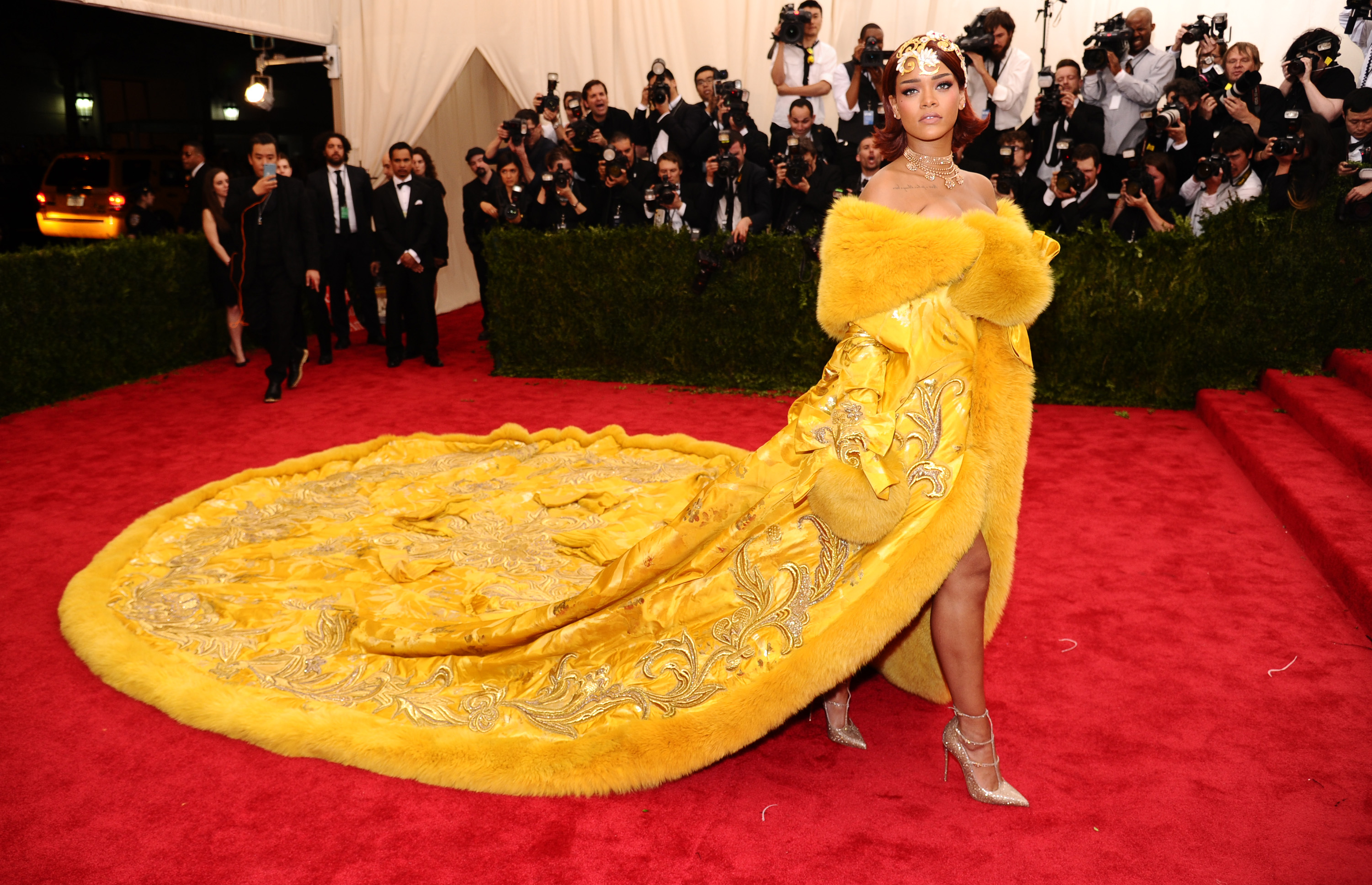 This will probably be the most glamorous thing I ever do. We wanted to do a look celebrating Chinese culture. Rihanna found that Guo Pei look on Google and texted it to me when we were talking it over. Guo Pei was totally unknown then in the Western world, and I couldn’t figure out how to get in touch with the house for the longest time. Finally I made contact with Jack, Guo Pei’s husband and business partner, right before the Met Ball, really down to the wire. Amazingly, he and Guo Pei were coming to New York in a few days and just put what I wanted in a bag and brought it to me. After so much time working on finding this Chinese designer, suddenly everything I wanted was right in front of me in New York. Still, since the coat was 55 pounds and over 40 feet long, how could she get up those stairs? I didn’t believe it was possible. But when Rihanna tried it on the weekend before the Met, I knew it was going to happen because she was so determined. It would be done. She knew. Every detail was planned out and took a lot of maneuvering. How to get out of the car even took endless discussion. There are so many photos of me and my former assistant Alexa covered in fur on the red carpet, trying to stay out of the picture as we’re helping her up the stairs—I mean we’re on the cover of the Met issue of Vogue and The First Monday in May movie poster, which is really entertaining. We completed the look with a gold Guo Pei headpiece and a beautiful fuchsia bustier made by Marley Glassroth that matched the lining of the coat. The jewels were all Cartier and the cage shoes were by Christian Louboutin. It was such an extraordinary outfit and moment. The thing that is so great about collaborating with Rihanna is that she has the intelligence and the intuition to make the right, flawless choice. There are so many things I can do—things with her that I wouldn’t be able to do with anyone else, and that’s really because of her instincts. Guo Pei later told me that this moment was a giant milestone for her and a point of pride for Chinese people, that the work of a modern Chinese couturier would be worn by such a huge star to a moment so big. I’m so proud of that, I’m glad we did it. The world needed that look, and she served it. 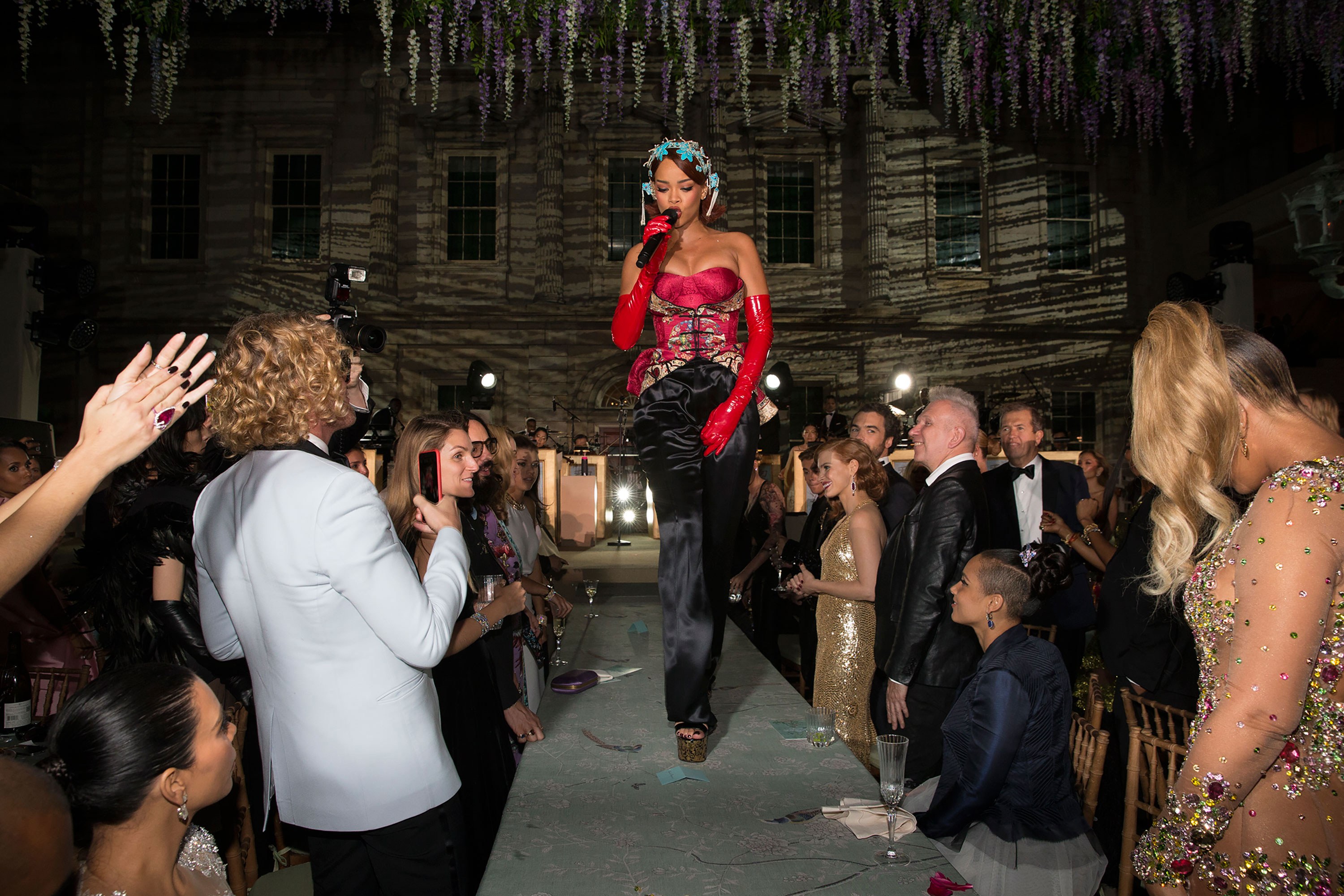 Rihanna performed at the China Met Ball as well, so after the glamour and drama of the Guo Pei red carpet, we went right into the Maison Margiela performance look, designed by John Galliano. John had just debuted at Margiela and I was inspired by the silhouettes and feeling from the show. I’ve known John a long time and worked with him for many years, and I knew his take on the Chinese theme would be right. The look was a bustier, silk wide-leg trousers, and an upside-down jacket made of deconstructed antique Chinese textiles. Latex gloves and antique Chinese head pins completed the look. This one was cool because photos are forbidden at the Met Gala and there were very few photos of it, so it was a secret thing. So if you’re reading this and have secret photos, DM them to me!

I am a huge fan of Rei Kawakubo and Comme des Garçons, so I went in early on this one. I assumed that everyone going to the Ball would wear Comme, and I wanted first dibs on my favorite looks. Adrian Joffe is the boss and guy to know at Comme des Garçons, and luckily for me, I know him very well. Five months before the Ball, we were together in Moscow for Gosha Rubchinskiy’s fashion show and went over all the possible looks. I knew that night that the floral masterpiece from her Spring 2016 show was the one. Luckily for me, Rihanna was down. We Rihanna-fied the look with custom thigh-high Dsquared2 stone-covered sandals and floral jewels from Chopard. She was such a vision that night and carried the look off with ease.

The Catholic imagination is incredible. I recently spent time in Rome and was seduced by Catholic masterpieces everywhere. The Vatican Museum and the Sistine Chapel are filled with the fiercest styling moments ever, each one more major than the next. So for this year’s theme, John Galliano was the only designer for me. Any fashion junkie knows John’s Catholic fashion moments for John Galliano and for Dior, and it goes without saying that he is one of the greatest fashion designers ever. I wanted to see how he would remix his Catholic inspiration for Maison Margiela. What John and Maison Margiela Artisanal created had the showstopping impact I was looking for. I loved mixing the papal vibes with the sexy strapless bustier dress; beautiful and daring and very humorous. The look took 250 hours to sew and 500 hours to hand-embroider. I can always count on my friend Stephen Jones for the best hat, perfect at every angle. The crystal-and-pearl handbag is custom Judith Leiber. Sadly, Judith passed away a few weeks ago. Her talent is unparalleled and I’m a mega fan. We tried a lot of shoes, but it was the moment for a deep charcoal-stoned Christian Louboutin Pigalle, the perfect shoe for this little dress. XIV Karats made custom anklets out of diamonds, pearls, and rosaries, which were layered together. The priceless Cartier rosary is from 1934 and is one of the greatest pieces of jewelry I’ve ever seen. The vintage 1870s diamond necklace from Kentshire was the just the right necklace to complete the look and keep the whole thing balanced. It was a killer night.

Rihanna and Stance have something for every lady this Valentine's: a limited collection of Cold Hearted socks. The socks feature hand sewn...