It’s not easy being a perfectionist. Manolo Blahnik is the first to admit it. “I hate that vase,” he gasps, physically recoiling in horror at a stocky bowl of tulips in the entrance hall of his Marylebone headquarters. Up in his showroom, a marble plinth recently installed to show off his new collection to international buyers taunts him with its hideousness. “It’s from a mausoleum,” he complains of the solemn slab. The lighting is also not up to standard. In fact, so many things cause offence to Blahnik’s exacting eye that he exists in a constant state of nerves for which the only cure seems to be work. Aged 74 he shows no signs of slowing down. 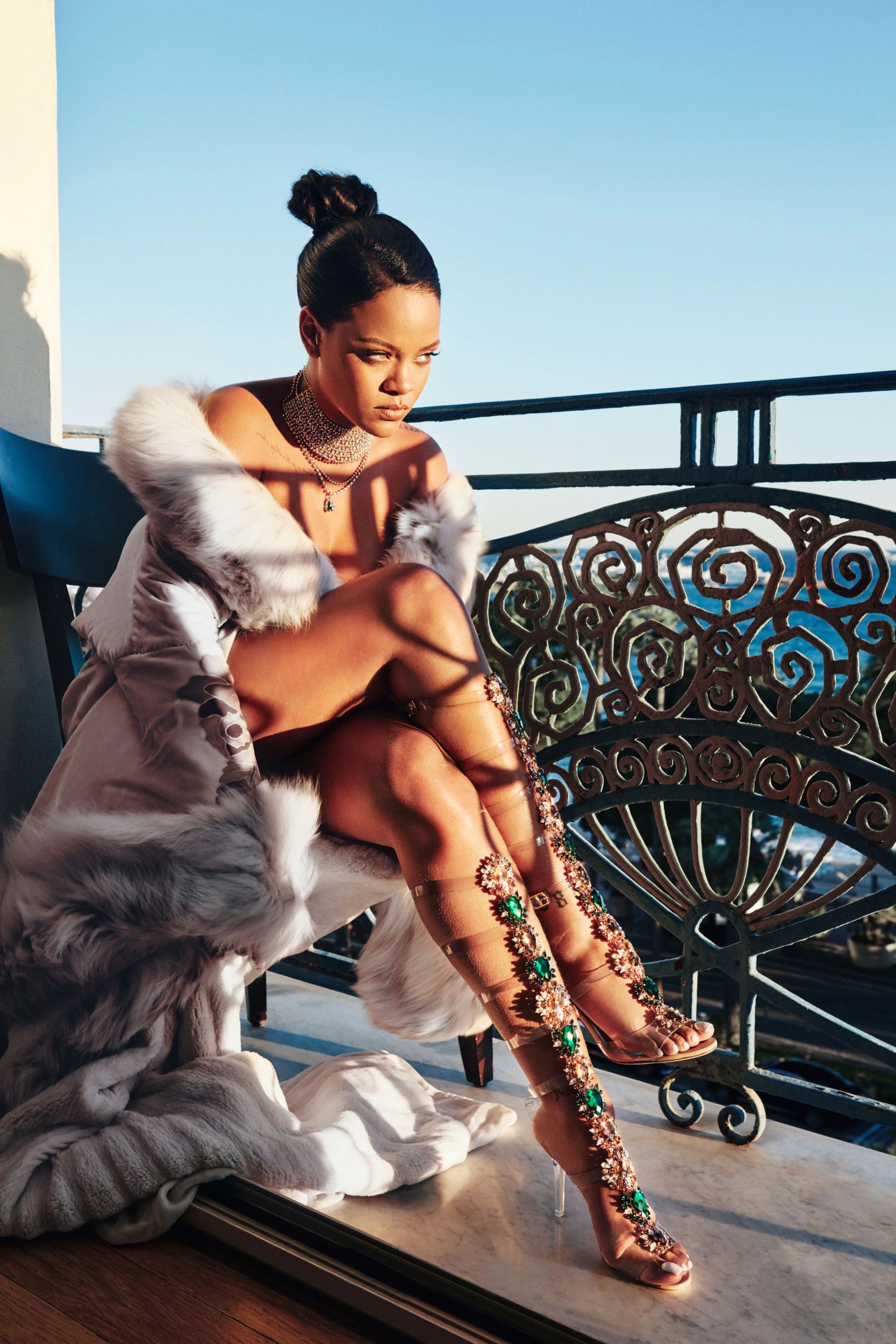 I interrupt him during one of his mammoth, daily sketching sessions. He produces 300 designs a season, channelling all his manic energy into the pursuit of the most elegant line possible. No wonder women turn to him for their big moments.

But Blahnik doesn’t just create fashionable footwear. His name is synonymous with sophistication, and his shoes have become the ultimate symbol of modern elegance. For more than 40 years he’s balanced classics with cool.

“I have found a trick with my shoes. They don’t have a time or a fashion thing – they just come out and they work,” he says as we settle down to tea. Blahnik is still clad in the white lab coat and gloves he wears to protect his immaculate clothes while sketching, but he’s eager to talk about his latest collaboration with Rihanna.

“She is like a regal Nefertiti,” he enthuses. “Alas,” he tuts, “she has all these guns, all the trash,” referring to her many tattoos. He may disapprove of them – once telling the 29-year-old star she’d regret her inkings when she was older – but he’s helpless when faced with her other charms.

“It’s in the movement of the neck. She turns and looks at you and you are just done. She’s got it. This girl has power. She has something different. I saw her move. You either have that kind of grace or you don’t,” he says.

The Bajan superstar has well and truly hypnotised the shoe maestro with her charisma. He’s now on to his third, and possibly final, design collaboration with her. “I don’t think I can do another one. It might kill me,” he jokes. Called So Stoned – a reference, Blahnik says, to Rihanna’s love of gems, not her well-documented fondness for smoking weed – it features four brilliantly bejewelled styles, with outsized, colourful crystals placed on clear plastic straps,

“So it looks as if they are floating on the skin. It was divine. It was easy as hell,” he says of their collaborative style. “She said, I love big stones, then boom! I do the shoes and that’s it. The only thing is there are too many people around,” he says, referring to her huge entourage who descended on his studio during their design meetings.

For Rihanna, who has also created high jewellery with Chopard and a line of sunglasses with Dior, the Manolo capsule further enhances her luxury fashion credentials. Blahnik’s reasons for collaborating are different.

“It’s the excitement. I’m not much in touch with young people because I don’t go out very much. I’m too old,” he says with a dramatic huff.

Not too old to learn new things though. Rihanna, he claims, pushes him to think differently. He remembers how she urged him to use denim, a material he’s “not keen on”, in their debut collection together.

“That was the first time I’d used it,” he says. “She challenges me. And I saw the bloody thing and it worked because it was done beautifully in Italy.”

Even when his designs are daring (how about a pair of bootie chaps belted at the waist and made of embroidered denim?) they are supremely elegant and Blahnik admits not everyone wants that. “The only public who don’t like my things are those Malaga, Costa del Sol women with everything inflated. They buy those Fredericks of Hollywood (the lingerie brand) type of shoes but done in Paris. Vile!” he says. “There is a public for that but not my public.” That said, he’d defend every woman’s right to wear whatever shoes she wishes. When I bring up the recent case of the receptionist at an investment firm sent home for not wearing heels, he says: “This is dictatorship!”

Blahnik’s Rihanna collaboration and his recent hook-up with the radical Vetements fashion collective (hip-high satin waders and crushed-back kitten heels) have also introduced his name to the Selfie Generation. He’s just returned from the opening of a large Manolo retrospective at the Hermitage in St Petersburg, where he couldn’t help but notice the shabbiness of some of the picture frames (“I’m so pernickety”). Whilst there, he was surprised by how many young girls on the streets wanted to take a picture with him.

A new generation of Manolo fans is ready and waiting, but he has eyes for only one.

“Rihanna is beyond cataloguing. The beauty of her – she’s stunning. The face; the neck!” he raves. “These people are born not made. Made is another story. ‘Oh,’ they say, ‘that person is so elegant.’ Well, elegance you can buy and put on. You can go to finishing school to learn manners but it’s not like that with Rihanna. She’s got that thing.”

And if bejewelled shoes are your thing, you can have it too. They will be available on Manolo Blahnik’s site starting July 6.