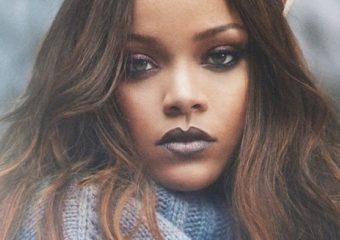 When leading Vogue stylist Anya Ziourova called Faeth Millinery‘s atelier for a once-in-a-lifetime commission, founding designer Ashley Ruprecht prepped to make fashion history. Taking direct inspiration from the cap crown of the bust of Nefertiti by Egyptian sculptor Thutmose (which was discovered in Amarna in 1912 by German Egyptologist Ludwig Borchardt), Ruprecht set out to capture the essence of the headpiece for Vogue Arabia’s November cover star, Rihanna. Ruprecht and Ziourova talk to Vogue.me about this ode to Nefertiti.

The cover shoot concept originated when Ziourova connected parallels between Rihanna and Nefertiti, including that the entertainer has a tattoo of the queen on her side. The Egyptian queen remains a universal icon of beauty of female empowerment, and during her reign 3,500 years ago had an active political involvement.

“Nefertiti was very much a pioneer, as Rihanna is in our time,” Ziorova tells Vogue.me. “So that was a perfect connection.” Ruprecht echoes Ziourova’s sentiments. “I think Rihanna and Nefertiti have quite a bit in common in regard to groundbreaking style and iconic feminine beauty.”

The shoot took place near the Strand in London, with a wardrobe of new-season pieces by Burberry, Gucci, and Prada. Gowns are offset with hoodies layered with textures of velvet, high-shine metallics, and cashmere.

Save for two photographs, the shoot centered around the placement of the cap crown worn by Rihanna. Exaggerated in dimension from the historical depictions of Nefertiti’s headpiece, the anachronistic effect it has on the cover shoot wardrobe is on-point for the dialogue between model and muse.

“Anya and I had a long discussion about if we wanted the crown to be a modern version of what Nefertiti would wear today, or if it would be a replica of the flat-topped cap crown she actually wore,” Ruprecht says.

The duo decided to replicate the headpiece in its present damaged condition, “but with a few elements dramatized.” Such a decision naturally brings with it practical complications, with Ruprecht having to work out how to create a crown that appeared to be made of damaged limestone, stucco, and ancient pigment while being wearable during a photoshoot.

THE MAKING OF NEFERTITI HAT

Millinery buckram coated in layers of sanded plaster, modeling clay, paint, and gold leaf proved to be the answer. She also looked to Fernando Cerchio’s 1961 film Nefertiti, Queen of the Nile, and the Stephen Jones headdresses for John Galliano’s Dior Spring 2004 Couture collection.

“Since Anya wanted the crown to be a replica of the bust of Nefertiti in its current damaged state, I had to create the plaster piece then damage it, and use a bit of trompe l’oeil painting to make portions of the plaster appear as if they were missing or much more severely damaged than they actually were,” Ruprecht says. “It was important to me to be as accurate as possible without taking too many artistic liberties. The one obvious liberty that I did take was to cover the diadem band that runs along the base of the crown and the broken Uraeus [the cobra above the brow of the crown] in 22ct gold leaf. Gold embellishments were not included on the original sculpture but were most likely part of Nefertiti’s actual crown of that period. There were so many challenges involved in the creation of this piece, from the incredibly short timeline, to the exact measurement of Rihanna’s head so that the plaster would not crack when worn, to the drying times between each layer of plaster and sanding, to the weight of the finished piece and the logistics of shipping this extremely fragile piece from my studio in New York to the shoot in London,” Ruprecht says. “I didn’t get much sleep during this project.”

Good things come to those who work late.

The November issue of Vogue Arabia, starring Rihanna in a homage to Nefertiti, is out now.