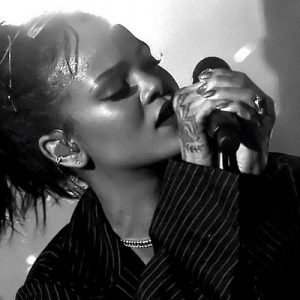 Kuk Harrell is an award-winning vocal producer that the Navy mostly recognizes for his amazing work with Robyn Rihanna Fenty.

In his recent interview with Vibe, Kuk Harrell dishes on working with Rihanna on her highly successful multi platinum ANTI album that came out in January 2016.

He did not mention the new project but did share that there’s growth from ANTI.

Working with Rihanna on ANTI:

It’s always amazing and with that particular album because it was a groundbreaking album. It took us three years to make the album and that was hard because it was highly-anticipated. But it was great because we all learned so much in working on the album. That’s the other thing. I love how for me it always keeps going back to the people skill. We had a lot of different things we had to make sure that the album was as we were working on it. There were times it created tension within all of us that worked on the album, nothing crazy, but just creative tension. With that, for me, also puts me in a place where I have to ignite my people skills: “Okay wait a second, we’re doing this. Let’s all make sure that we’re connected as people so that the creativity can flow.”

Songs he had most fun while recording for ANTI

I would say Higher because we worked on that. Her vocals went to another level with that record. And the other one is Work because I never worked with Drake before. To see Drake walk in the room was like “Oh snap!”

On Rihanna’s raw vocals on Higher:

She’s not in a shell at all. It was just that record was great because it was a challenge for us. It was just a thing that goes back to what you were saying — growth. It was a record that caused us to go, “We can do this, we can nail that record,” and we did.

Kuk and Rihanna worked together on ANTI, Unapologetic, Talk That Talk, Loud and Good Girl Gone Bad albums. He has five Grammy Awards including two for his work with Rihanna (Best Dance Recording for Only Girl (In the World) and Best Urban Contemporary Album for Unapologetic).

Kuk also talked to Billboard and shared stories behind some of his most famous and successful hits. As you could expect, he talked about Rihanna quite a lot and even called ANTI her magnum opus.

Me, my cousin Tricky Stewart [founder of Atlanta’s music production company RedZone Entertainment] and The-Dream wrote “Umbrella.” [Former Def Jam chairman/CEO] L.A. Reid heard it through Island Def Jam’s Karen Kwak. Rihanna just signed to the label and they knew right away that was a hit for her. A week later, we were in Los Angeles cutting this record. This was the first big artist I’ve ever worked with, and I wasn’t even technically considered a vocal producer at that point. I was like a kid in a candy store! But once I get in the studio, I’m not thinking about anytime except for making sure I get the best performance out of the artist. And once I’m done with a record, I don’t get into the science of, “Man, this artist is going to be huge!” I just stick to the emotions.

Rihanna wasn’t shy at all, she was a pro while still so young and one of the best artists in the game. That’s why she is who she is, because she’s been confident since she came into the industry. She was very cool and very welcoming because she understands the value of her team — we help her make the hits. [Umbrella] was my very first professional record, at 40 years old — fortunately the song blew up and got us where we are now. I had no idea it was going to be this huge, so I was blown away! Tricky had been in the industry for a few years, so I think he had an inkling for hit records. But I was the new kid on the block and really excited because I could take care of my family. Age doesn’t matter, as long as you’re consistent.

I didn’t work on Rihanna’s Rated R album, they had another vocal producer for that one. But when they got to Loud, L.A. Reid asked me to work with her again. And I’ve been with her ever since. The first record that we cut was “S&M.” I was excited but nervous at the same time because I didn’t know how she would respond to me — I hadn’t seen her in so long. But she listened to the song and was like, “Yep, we’re good!” Only Girl (In The World) was also a fun one to record and we won a Grammy for it [for Best Dance Recording]. She was on tour when we cut this album so we were all over the place. I think we were in Miami when we cut that record. It was special because we both had listened to it separately for a couple of days and knew there was a high-energy magic we had to capture in her vocals.

Any time I work with Rihanna, we always go for the best. We never cut something once and say it’s great. We dig in and make sure that every single word, syllable, breath and element of that vocal is gone over with meticulous detail. So it’s not difficult, we just work hard at it and have so many different takes of each song.

We recorded this album in the middle of the Loud Tour, but the only thing intense about it was the moving around part. We’ll be in one city today, and the next day we get on a bus or airplane. Marcos [Tovar], one of our engineers, helped me set up a studio in the new place and we’d start recording. But once we get in the studio, it’s all good because we’re all doing what we love. Part of my job’s responsibility is to gauge how tired the voice is. So if she was tired one night, I would give her songs that were more vibe-y and didn’t have a lot of high notes. So it’s all about finding that sweet spot and making it work.

We Found Love was one of my favorite songs to record for the album; I think we were in Sweden. It wasn’t vocally challenging, but we had to reprogram our thinking because the song wasn’t in a traditional format. It wasn’t verse-chorus-verse, it was basically a hook. But the energy was so insane!

Rihanna has always known who she as an artist, but with ANTI she developed more of what she wanted her music to convey. For this, she drilled down in making sure she made the right calls for every single song. This particular album took three years to create, and that caused intensity because the fans wanted to listen to it so badly and kept asking when it was coming. I don’t focus on that stuff at all because you start to hear that [pressure] in your music. You can’t dictate feeling. So if you start calculating it, people will notice that. But we all just wanted to make sure that it was the right album and exactly what Rihanna wanted it to be. She led all of us to a great place.

Her vocals didn’t surprise me due to the fact that I’ve worked with her for so many years, so I always knew what she was capable of. I was excited when we were cutting songs like Higher. When she started hitting those high notes, I was like “Woah, we’re actually doing this!” We’re always pushing the envelope and doing something different; I wanted to bring out the best aspect of her voice in a way that isn’t too much. ANTI is absolutely her magnum opus — it was a game-changer. I think [the album] made everybody get back to a point where they took their craft seriously as opposed to the cookie-cutter rhythmic stuff. They didn’t just jump in the studio, put four bars together and sing a hook over it. In this album, you can hear that we focused a lot on detail.