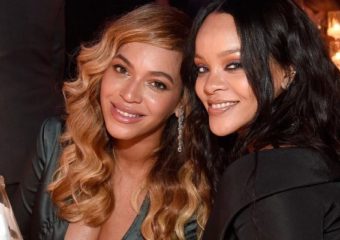 Rihanna’s Diamond Ball, now in its third year, is a benefit for a worthy cause: her Clara Lionel Foundation, named after her grandparents, which raises money for impoverished communities across the globe, with healthcare and education among other various programs. The last one, in December 2015, raised $3 million. But let’s be real: Like most such events, the warmth from the gift of giving is spiked with the thrill of rubbing elbows for a night with Rih and Jay and Bey and Leonardo and a bevy of supermodels and media magnets. All this while MC Dave Chappelledelivers a side-splitting monologue, Kendrick Lamar performs a tight 30-minute greatest-hits set, and Calvin Harris closes the night with a DJ set while people try not to look like they’re staring as Jay Z and Beyonce sit at their table, talking animatedly to each other, and eventually chatting with others. (We’d love to know what Beyonce said to Rihanna that made her place her hand over her mouth with astonishment.)

Among the others we spied in the house: Trevor Noah, Jamie Foxx, Future, Lil Kim, Yo Gotti, Emily Ratajkowski, Karlie Kloss, Gayle King, Magic Johnson, Young Thug, Black Thought, La La Anthony, Petra Nemcova, and not least Cardi B, who wore a wild Christian Siriano dress with a train so long that she walked the red carpet with three people holding it. (She left the event several hours later with just one.) Also on board were executives like Republic CEO Monte Lipman, Warner/Chappell CEO Jon Platt, Atlantic Records co-chairman Julie Greenwald, a table filled with Apple luminaries including Robert Kondrk, and loads more.

The evening proceeded at an orderly but unhurried pace — the red carpet opened at 5:15 p.m., and when we left at 12:30 a.m., the party was just starting to wind down. Rihanna, resplendent in a black gown and dazzling diamond necklace, delivered a welcome speech thanking everyone for their support, then Dave Chappelle delivered a hilarious monologue that was basically everything one could hope it would be. He addressed the evening’s ambiance — “This room is beautiful, but it feels like we’re gonna sacrifice some motherf—er, there’s candles and s—. It reminds me of an orgy I once went to” — his penchant for f-bombs — “I’m sorry Rihanna, is this a non-swearing event? [Addressing a young woman in the crowd.] I’m sorry, how old are you? 16? You know R. Kelly peed on somebody like you!” — and, repeatedly, President Donald Trump.

“S—’s not going well for us,” Chappelle said. “The president is f—ing up. I feel bad — on ‘Saturday Night Live,’ I was the first one in America to say, ‘Hey y’all, give him a chance.’ Shouldn’t have said that s—. Now every time he f—s up, I go into the barbershop and n—as look at me like ‘What’s up with your boy?’ Motherf—er is clearly, clearly not having a good go of it. Can we agree on that?”

Then came the auction, complete with a videotaped message from former President Barack Obama, where Chappelle himself paid $180,000 for an original Retna painting and another item went for $275,000.

Finally, the evening concluded with Lamar’s short, but tight performance, including Bitch, Don’t Kill My Vibe and finishing with a rousing version of Humble. The evening wound down as Harris hit the ones and twos — while some people grooved, it mostly provided a soundtrack for people-watching.