On Tuesday, Nov. 29, Footwear News will host its 2016 Achievement Awards in New York, honoring the best and brightest in the industry, including Rihanna’s Fenty Puma Creeper, the Shoe of the Year winner. Read on to learn more about the singer-designer’s accomplishments.

This year brought plenty of great shoe styles, but Rihanna’s Fenty Puma Creeper was the clear, absolute choice for Shoe of the Year. The sneaker had universal appeal to both men and women, and with the help of mega-star Rihanna’s celebrity platform, generated tremendous hype and strong global sales.

For Puma, bringing Rihanna on board as women’s creative director was a similarly obvious choice. In 2014, Puma was in the process of a major rebranding. Olympic gold medal sprinter Usain Bolt was the most recognizable face of the Herzogenaurach, Germany- based, Kering-owned athletic company, and it became evident that Puma desperately needed a female face to embody its new sport-with-attitude direction.

“We had all these names, and none of them made any sense,” said Adam Petrick, Puma’s global director of brand and marketing. “When we expanded the circle to entertainment and fashion, it was so clear who it needed to be. Rihanna exactly matched the brand values.”

As it turns out, it made a lot of sense on Rihanna’s side, too. The Grammy Award-winning singer, who is often lauded for her daring style, was interested in the opportunity to make a meaningful impact on the brand’s success. Rihanna and Puma announced their relationship in December 2014.

By the time of the first drop of the Creeper — a spin on Puma’s Basket silhouette with a creeper-style midsole — in September 2015, there was so much built-up anticipation that the shoes sold out in three hours. 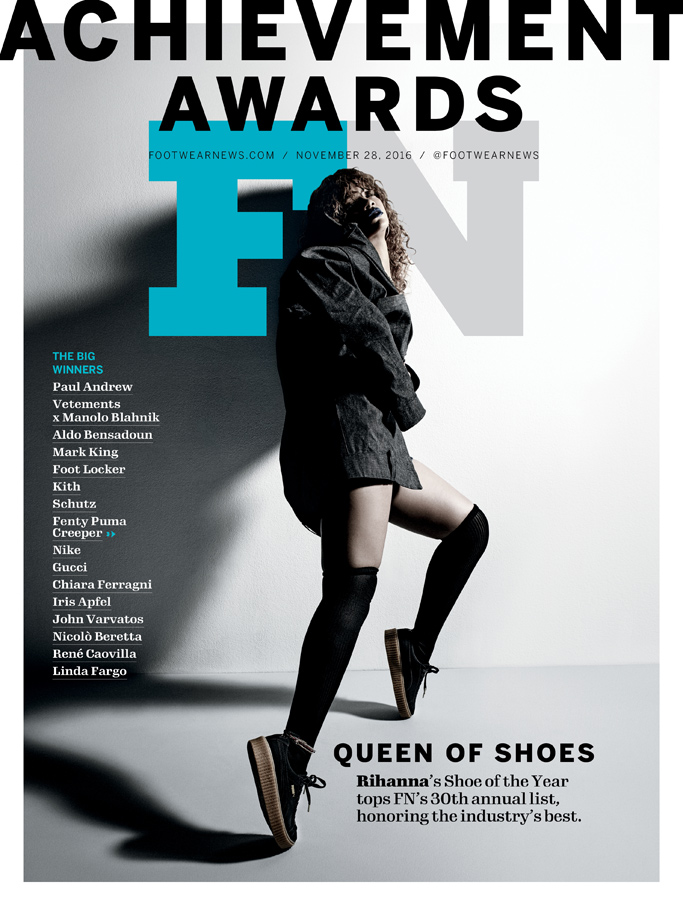 The Creeper has continued to be a best-seller, and Rihanna’s partnership with Puma has expanded to include the release of a trainer, a faux-fur slide and two hot-ticket runway shows. For Puma, the collaboration has been a driving factor behind its rising sales recently. In the third quarter of 2016, footwear was its strongest category, with sales up 16.4 percent, thanks in large part to the Fenty line.

The magnitude of the Creeper’s success is not lost on Rihanna.

“In my wildest dreams, I never would have imagined an honor like Shoe of the Year,” the star told Footwear News. “It means so much to me to make a mark like this in the shoe and sneaker industry and to have so many people share my love for the Creeper.”

“This is not a crazy product that’s hard to imagine yourself wearing,” said the executive, citing the color variety as a key part of the success. “And hey, it’s Rihanna. She’s brought an energy and excitement that would have been impossible for us as a brand to accomplish. She has an immense following, and when she asks her following to participate in something, they do.”

And the global star did not merely slap her name on a shoe. Petrick recalled that at one of Puma’s early meetings with Rihanna in New York, she came armed with handouts expressing her ideas.

“It was amazing, and now you see how everything she talked about at that time came through in the creative direction,” he said.

As for retailers, the response has been overwhelmingly positive.

“The launch of the Creeper is game-changing for women’s sneaker fashion,” said Natalie Ellis, VP and GM at Six:02, Foot Locker’s women’s banner. “We saw tremendous consumer excitement for the silhouette and Rihanna’s passion for fusing sport and style.”

“It’s pretty clear we have something that everybody wants. You can see that shoe from a distance of 25 feet and you know what it is, but it is also easy to wear. That’s a killer combination. That’s what it takes to be a Shoe of the Year.”