If the word ‘iconic‘ had a different definition, this entire look would be it. Rihanna graced the red carpet at the 57th annual 2013 Grammy Awards on Feb.10 (which happened to be my birthday) at the Staples Center in Los Angeles looking like a descended angel from heaven dressed in a hot red, flawless dress to amaze the world. She wore a custom Azzedine Alaia dress, with Neil Lane jewelry and finished the look with a pair of Manolo Blahnik shoes. The Fashion & Music icon headed to perform her 2nd single ‘Stay’ from her 7th studio album, and ended up leaving with a Grammy Award for her music video for ‘We Found Love’.

$he, who won best dressed out of everyone who attended that award ceremony, slayed effortlessly. From the hair, to the outfit changes, to winning a Grammy, The 2013 Grammy Awards will most definitely go down as Rihanna’s best appearance at an award show EVER. This look is one of the main reasons why she won the Fashion Icon award at the CFDA’s last year. Will she top this look at the next Grammy Awards in 4 days? Something tells me she will because her looks are always on another level. But at the same this outfit is goning to be really hard to beat… only time will tell. Good luck to you Rihanna! 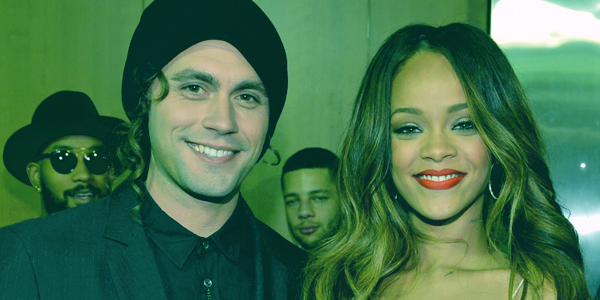 Rihanna is set to perform her new single ‘FourFiveSeconds’ at the Grammy Awards this year so the night will be full of excitement. Make sure to visit our site Sunday evening and Monday morning to get all the photos and videos!