The new Flawless Flashback Friday has finally arrived! We’re starting the year off with the highlight of 2014 for Rihanna and all of us.

I’m pretty sure we can all agree that June 2nd 2014 was the biggest day for Rihanna in 2014. That day Rihanna went to the Annual Council of Fashion Designers of America Awards to not only slay lives and make the most controversial fashion moment this decade (and possibly of all time), but she also went to accept a very special award -also known as- the Fashion Icon Award. And how else will a Fashion Icon accept such a honourable and legendary award other than while wearing the most extraordinary and breathtaking outfit that’s ever been witnessed by the mankind?  Well.. most of the people might say it isn’t really an outfit and only a reach for attention, but no, not with Rihanna.

Rihanna, being the fearless goddess that she is,  left very little to the imagination barring her nipples and her bottom in a see-through, sparkly custom Adam Selman gown which she accessorized with a fur scarf and completed with a headscarf and a pair of gloves which were embellished with over 216,000 Swarovski crystals. The outfit was definitely a fashion statement for the whole world and she did it with complete ease and effortlessness.  The designer of the outfit Adam Selman explained what it took to create the outfit by saying “fishnet and crystals and a couple of fingers crossed.”  Rihanna said the singer and actress Josephine Baker paid a huge role as the influence for her outfit. This outfit also beat the record for the Most Searched Outfit on Google beating another Fashion Icon Award winner Lady Gaga with her controversial VMA Meat Dress. 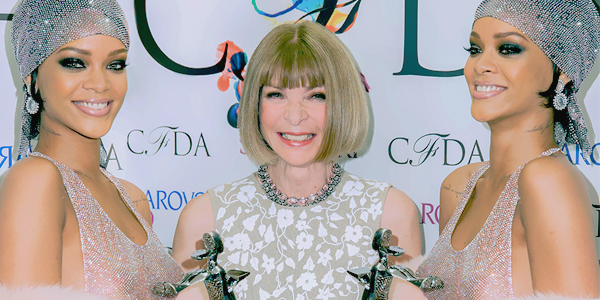 This look will definitely go down in fashion history as the most daring and extraordinary look any human could ever think of trying to pull off.