The latest fragrance by Rihanna was launched at the beginning of December 2014 before the holidays. The name of the perfume is Rogue Love, successor of the first fragrance Rogue presented in 2013. The new perfume was announced by the campaign with photos of Rihanna and the flacon takes the shape of the previous flacon differing only in the stopper, which is colored in white this time. 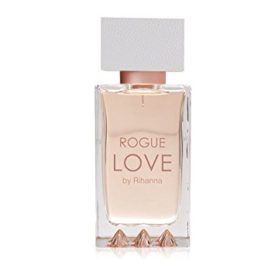 The composition of Rogue Love is composed of citruses and flowers and is inspired by the feeling of falling in love. It lines notes of juicy mandarin, red berries and velvety peach, followed by jasmine sambac combined with honeysuckle, orchid and coconut. The base blends soft and sensual vanilla with amber, creamy woody notes and caramel. Perfume Rogue Love is available as 30, 75 and 125 ml Eau de Parfum, as well as in a gift set with two flacons, one as 125 ml and the other one 15 ml.

The fragrance was created in collaboration with Parlux, and was available in the USA and worldwide. According to Parlux, the advertising campaign was taken by photographer Mario Sorrenti who eternalized Rihanna in this sensual edition.