The whole world is in awe with Rihanna’s new album cover. The cover of ANTI album is one of a kind; it’s unique, and it speaks a lot to the listener and that viewer. It’s simply a piece of art.

Hosting the event at Mama Gallery in Downtown Los Angeles’ Arts District, Rihanna revealed the new album’s title, ‘Anti’, with a written explanation on the entryway wall, defining the word as “a person opposed to a particular policy, activity or idea”. 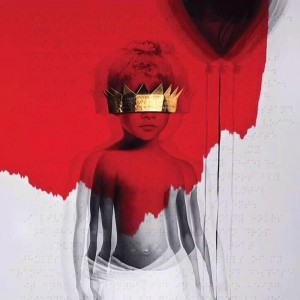 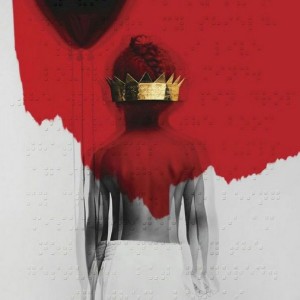 Inside the event, various braille art pieces graced the walls. Upon entry, the fans were given red sashes and then later used them as blindfolds, adding their own fingerprints to the Israeli artist’s pieces.

Midway through the event, Rihanna arrived and spoke about both the new album and the artistic collaboration with Nachum.

“It started with a random conversation in the studio at 4am when a friend brought up the artwork of Nachum,” Rihanna told onlookers, “and when we met, he just asked me what would make me a happy girl.”

The resulting artwork is taken from a childhood photo of Rihanna, given a black balloon and a crown covering her eyes. Included is a braille poem, titled ‘If They Let Us,’ written by friend Chloë Mitchell, which reads:

“I sometimes fear that I am misunderstood.
It is simply because what I want to say,
what I need to say, won’t be heard.
Heard in a way I so rightfully deserve.
What I choose to say is of so much substance
That people just won’t understand the depth of my message.
So my voice is not my weakness,
It is the opposite of what others are afraid of.
My voice is my suit and armor,
My shield, and all that I am.
I will comfortably breathe it in, until I find the moment to be silent.
I live loudly in my mind, so many hours of the day.
The world is pin drop sound compared to the boom
That thumps and bumps against the walls of my cranium.
I live it and love it and despise it and I am entrapped in it.
So being misunderstood, I am not offended by the gesture, but honored.
If they let us…”

“She got the spirit of what I wanted embodied in this into words,” Rihanna explained. “We just talked and we laughed and we drank, and this is the poem we came up with, which is If They Let Us.”

Rihanna would go on to say that the use of braille was inspired by the idea that those can see the best, sometimes see the least, while braille is something that has characterised Nachum’s artwork in the past.

“People who have sight are sometimes the people who are blindest,” says Ri, rationalising the significance of the Braille. “It’s good to look a little deeper and experience something new, other than the things on the surface.”

Before handing the microphone to Nachum and posing for photos with some fans while a DJ played ‘Bitch Better Have My Money’, Rihanna added “this is my favourite album artwork yet in my career”.

“In her collaboration with Roy Nachum, Rihanna has changed the history of album art. By continuing to follow her own instincts, her work strives to make an impact by doing the very antithesis of what the public expects.”

Falling down backwards into deep water,
As my eyes opened I knew that I was naked,
Floating on the waters surface,
Alone with the reflections of myself.

My face in deep shadows,
Dreams and ideas beyond limits,
The future is all I have to look forward to,
I turn myself inside out,
Only then am I whole.

PARTYNEXTDOOR will release his new album PARTYMOBILE tonight and Rihanna is going to be featured on a song titled Believe...

Rihanna graces the cover of Vogue's US November issue and she even gave an interview. The photos were taken by...

Rihanna has signed a worldwide publishing deal with Sony/ATV Music Publishing that will cover all her music catalog and future...