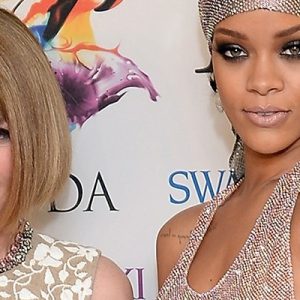 Vogue released the new video from their Go Ask Anna series where Anna Wintour is being asked about various of things. This time the video starts with a question regarding Anna’s opinion on Rihanna’s style. The icon in fashion industry replied as follows:

I can never get enough of Rihanna’s style. The two opportunities beyond the cover shoots that we’ve done with Rihanna that I was able to work with her closely was the time she performed at the Met. Then this past year when she was a co-chair. She asked John Galliano to design a look which was an homage to the Catholic Church. She had the look that she wore on the red carpet made in three different fabrics. She had it made in cream, she had it made in grey and she had it made in black. Each one was completely finished, completely perfect and there was a papal tiara made to go with it. So it was obviously an homage to the Holy Father whether the Catholic Church saw it that way, I’m not so sure. She and John worked together so closely on that very triumphant look. I think there is a real love for fashion that Rihanna has that is… How lucky are we to able to enjoy it?